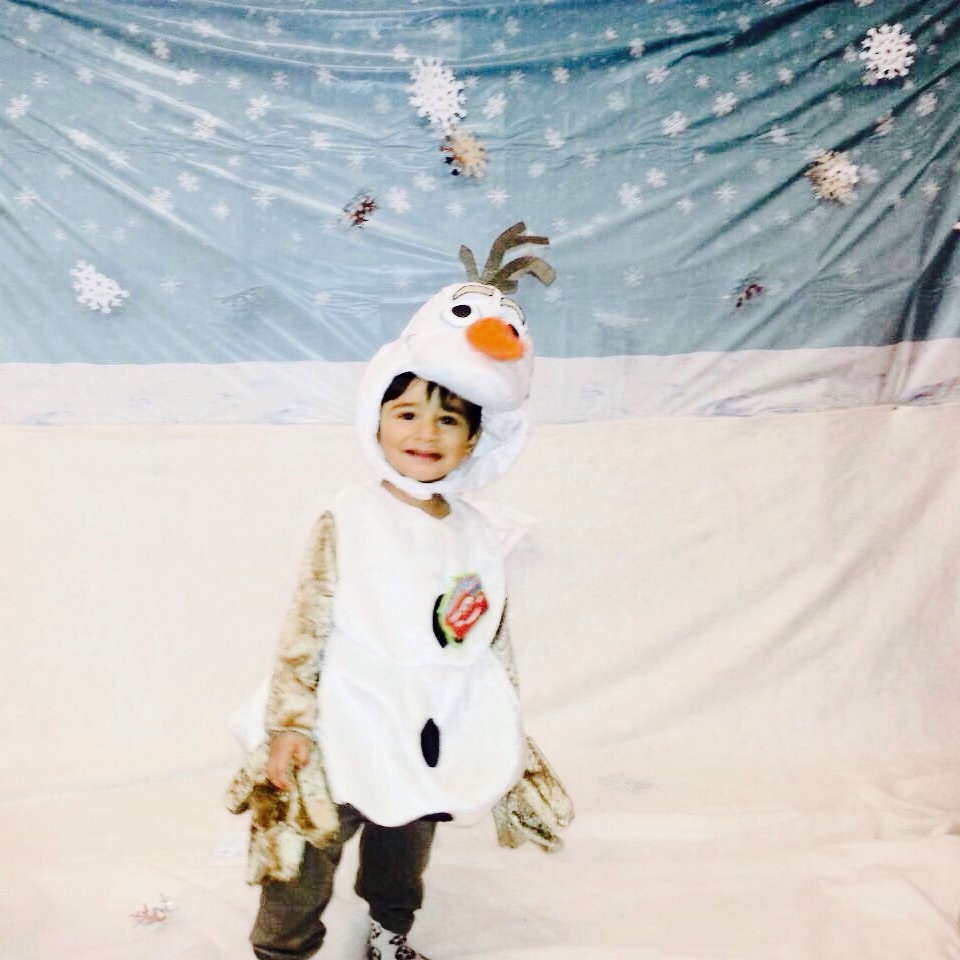 Unless you have been living under a rock, 2014 was the year Frozen took over the world.  The Fiveadventurers household was no different and come summer time Maya requested a Disney Frozen party.  As Maya and Zayn share a birthday we needed to make sure it didnt choose a theme that was too girly but with characters like Olaf and Kristoff (who doesn’t love a man who knows a thing or two about love!) we decided to throw a Disney Frozen Party bonanza!  Parties have been getting a very bad press at the moment and I will be honest I love birthdays.  We are from a huge family and are really close so our parties are busy affairs with over 80 people attending.  For me, I love trying new things and giving everyone who attends our parties a good time but I have been blessed  with an amazingly talented family who apart from their normal day jobs have a multitude of great skills from face painting, baking and general great party throwing skills.  They all muck in so the workload is shared and I know I have lots of people to rely on.  I have read on all the parenting sites that we need to go to traditional parties of games and cake, we have all that and as we do it all the extras ourselves so the cost is not too bad compared to those who would be paying for everything.  So here is the details of the birthday.

I design my own invitations on Powerpoint and then save them as jpegs and send them off to either Photobox or Snapfish to have them printed off.  I much prefer my homemade ones then the shop bought ones and the kids love their pictures being on them.  They do take a while to make but its all the small touches that count for me and the cost tends to be around the same as bought ones.  This was the invite we had for our party. 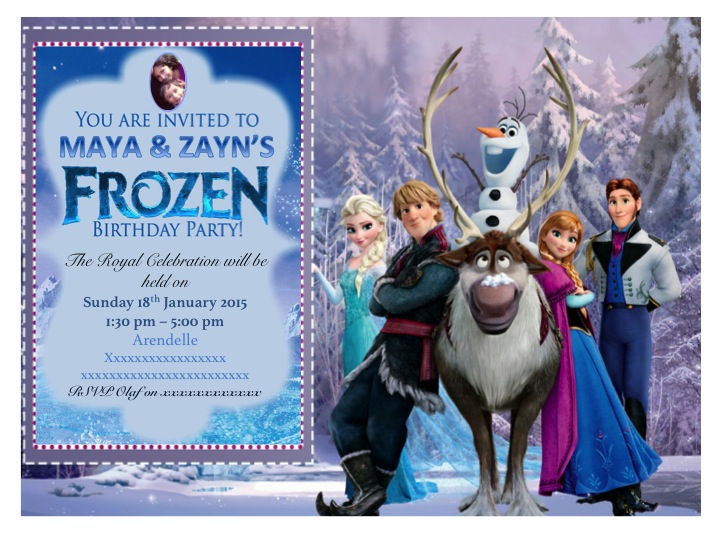 Costumes are a must for any themed party and we love to go all out!  The Princess outfits are available on the high street but the Disney Store ones totally rock.  But at £60 a dress I couldn’t justify the expense.  We love Anna in our house she has so many characteristics of our lovely Maya (the brooding Elsa is definitely my niece Zara) and Maya wanted to dress up as her for the party. We originally purchased the blue and purple outfit (whe
n it was on offer) but Maya ended up wearing it to a few things including her Youtube debut for the Mark Warner entry.  So when we saw the green coronation dress on sale, we couldn’t resist.  We were so glad we did as she looked adorable on the party day 🙂  That is my favourite picture from the whole day, my gorgeous sister with my beautiful baby girl. 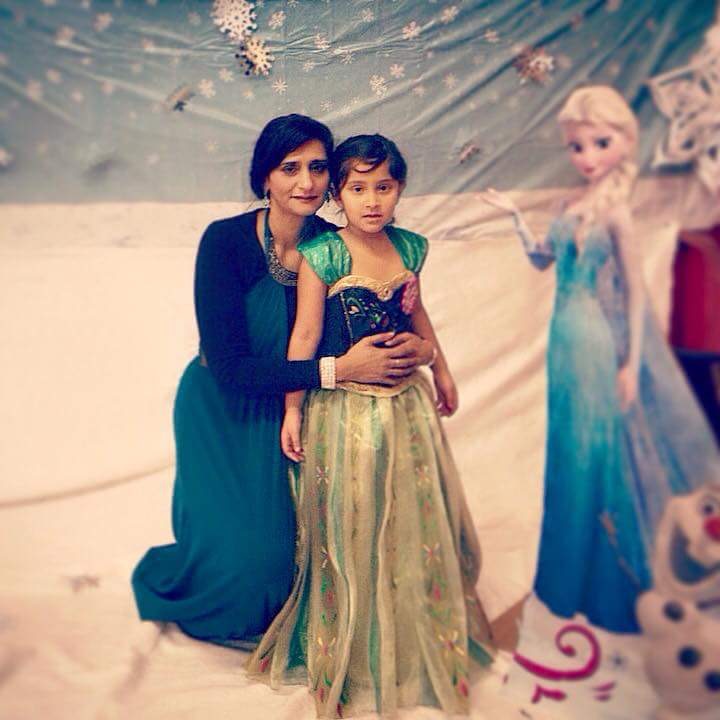 Now the boys were much more difficult to get outfits for.  Luckily when scouring the internet in December I cam across a great deal on Playpennies which had an Olaf outfit reduced to a mere £4 at Matalan.  I was so chuffed and thought I would order it and could afford to risk it not being very nice.  However, the quality of the product was great and a steal at the price I paid for it.  We had originally purchased it for Raihan but Zayn decided he wanted to be Olaf, and despite the sizing of the outfit being 5-6 years old, it was a perfect fit:) 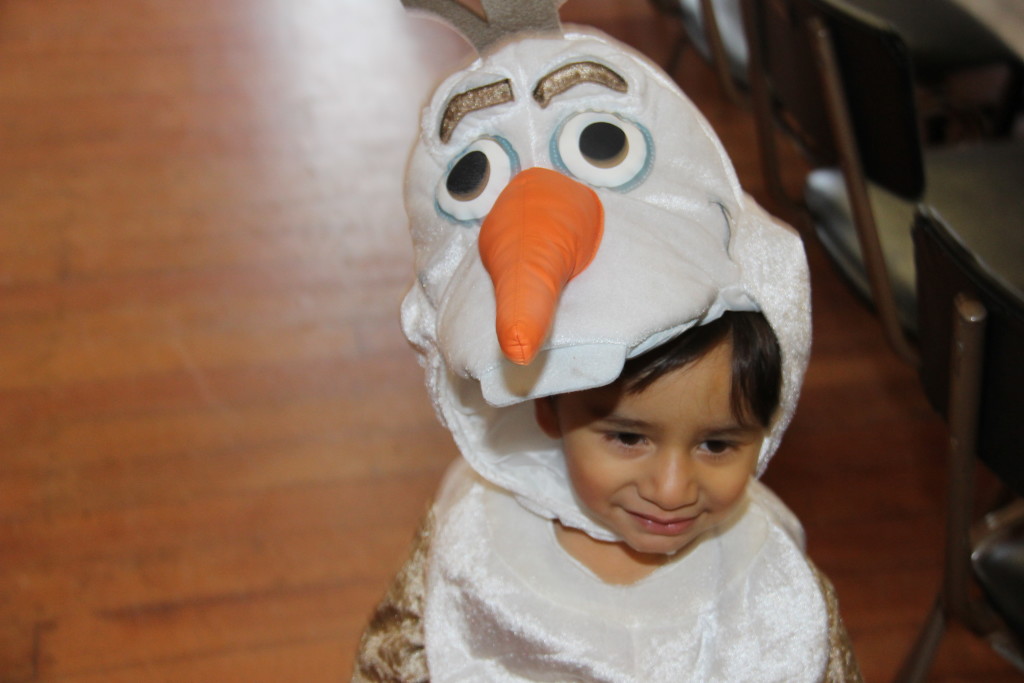 On to my most crafty outfit I have made to date (I would love to be a crafty mum but I just am not crafty enough!).  I decided to make a no sew version of the Kristoff outfit.  It was the top that needed to be done and after a few hours with a the glue gun we transformed a plain black t shirt to this gorgeous costume.  It looked great and we got so many comments on Raihan looking so cute.  It was perfect and add on black trousers,  hat and full sleeved top you have your own Kristoff!  I will be doing a separate post on how to make it. 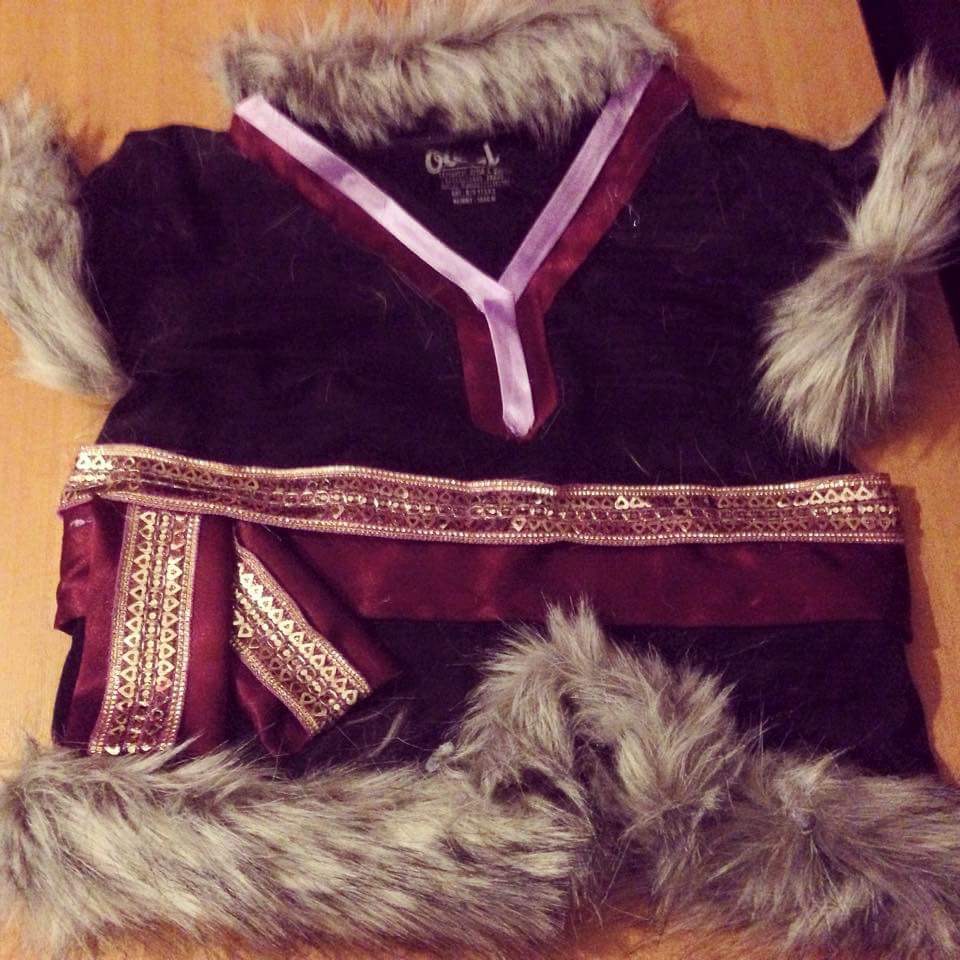 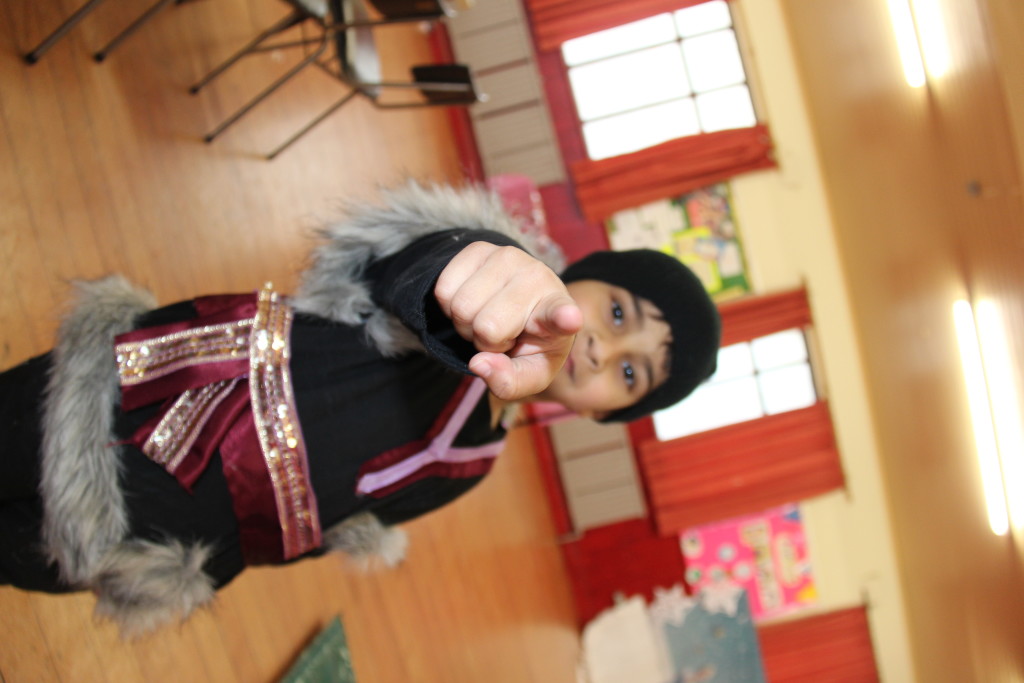 No birthday is a birthday without a delectable cake and we are so lucky to have such a talented sister in law and brother who make the most amazing cakes.  This years cake was the most spectacular of the lot with such amazing colours, characters and bowl to add to the awesomeness of it all 🙂  They bake these cakes for my children just out of pure love and it saves me such a huge expense! 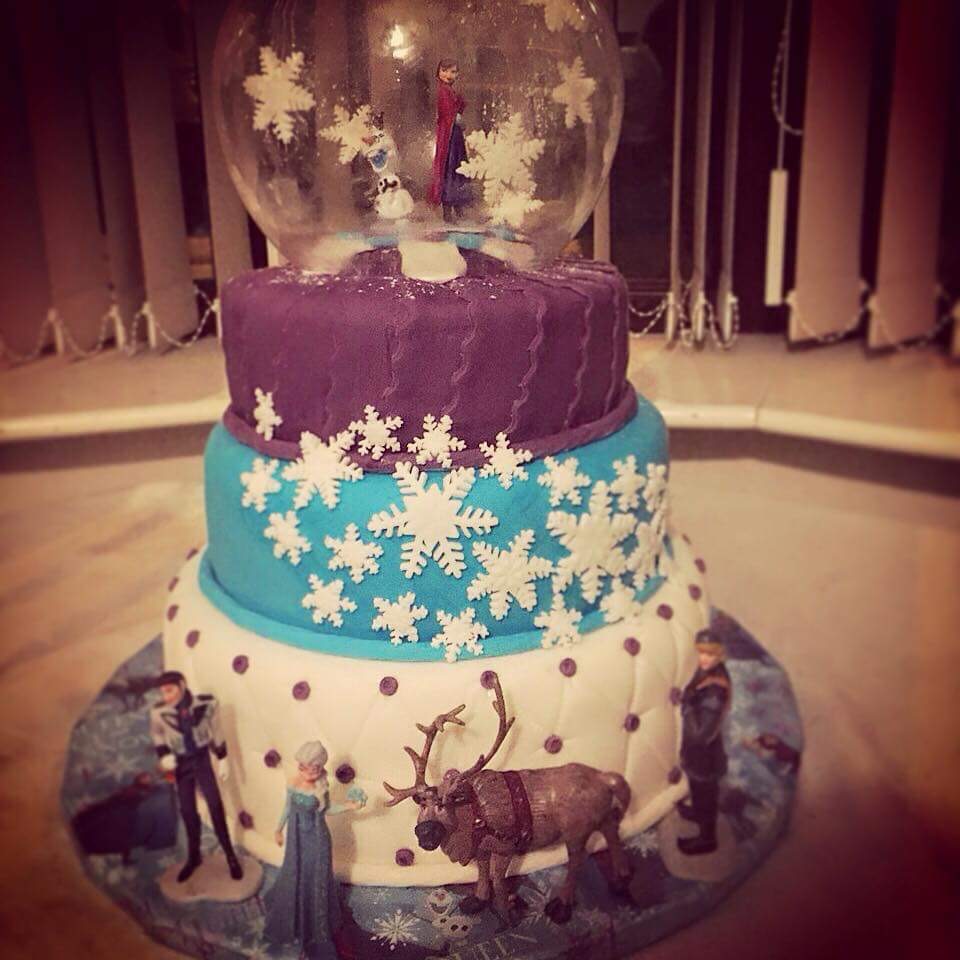 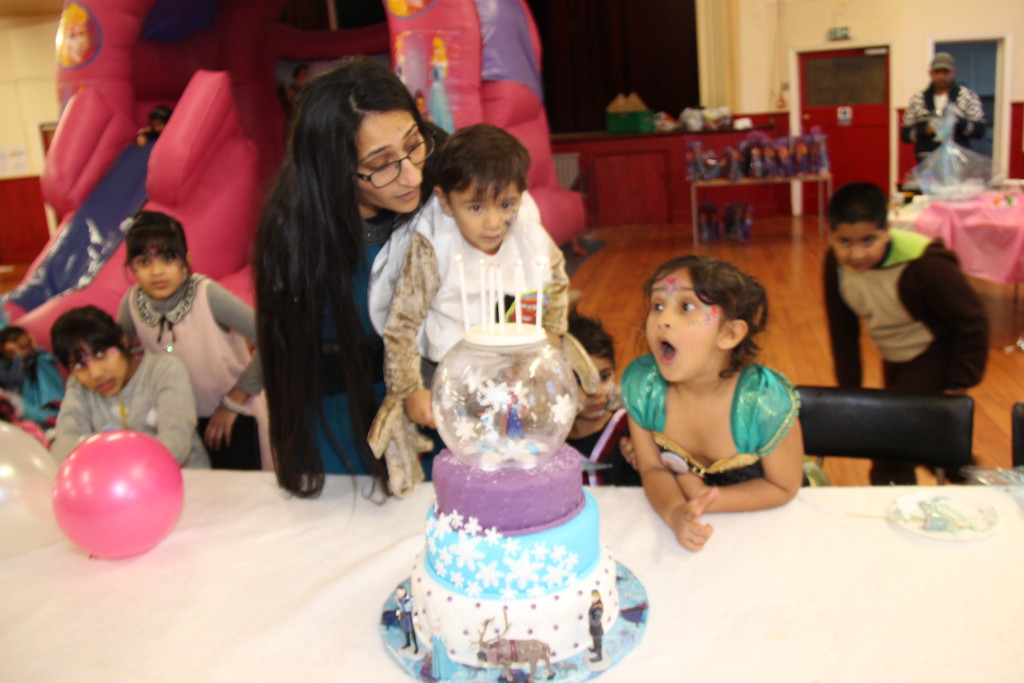 I love photobooths and the children love having their pictures taken in front of it.  The cardboard figures of the princesses are selling for about £30 each so we decided to buy paper ones and make our own.  As Frozen is so big, everything is always full price with hardly any bargains to be found but we found this pack for £12 and had they had really big pictures of the princesses, perfect size for a cutout size.  I left this job to Doc and he did such a great job. 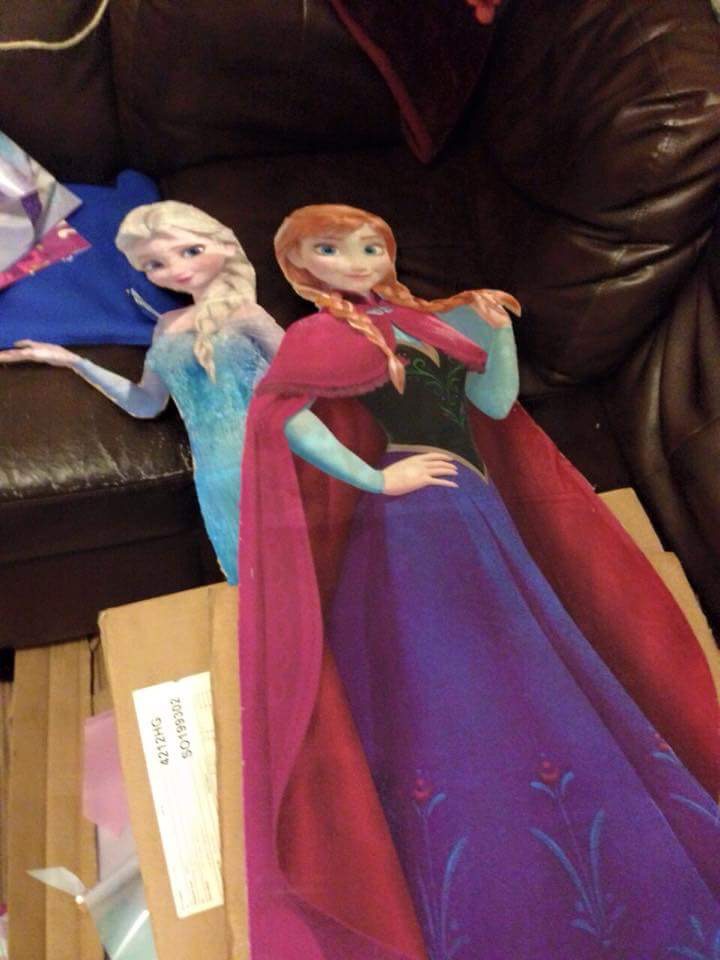 We bought a roll of a snow scene for the background and my sister picked up some cheap white fluffy material for the floor.  My very talented niece (photographed) made these beautiful snowflakes which were the perfect last touch to our photobooth.  These snowflakes are fantastic and a great craft for winter and Christmas.  They totally steal the show compared to the normal snowflakes we used to make at school. 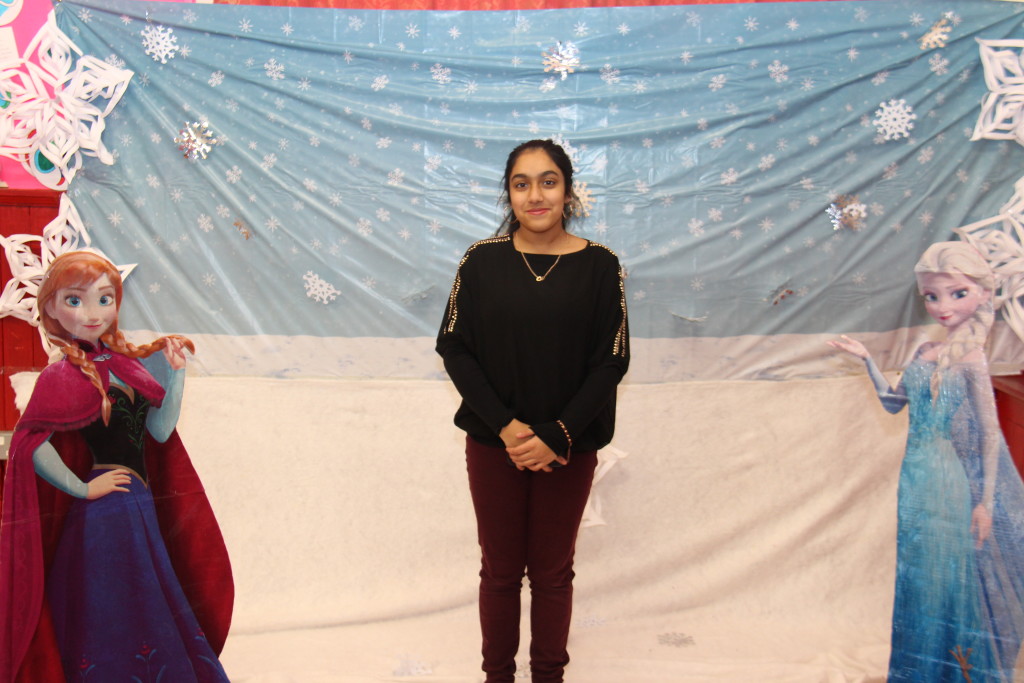 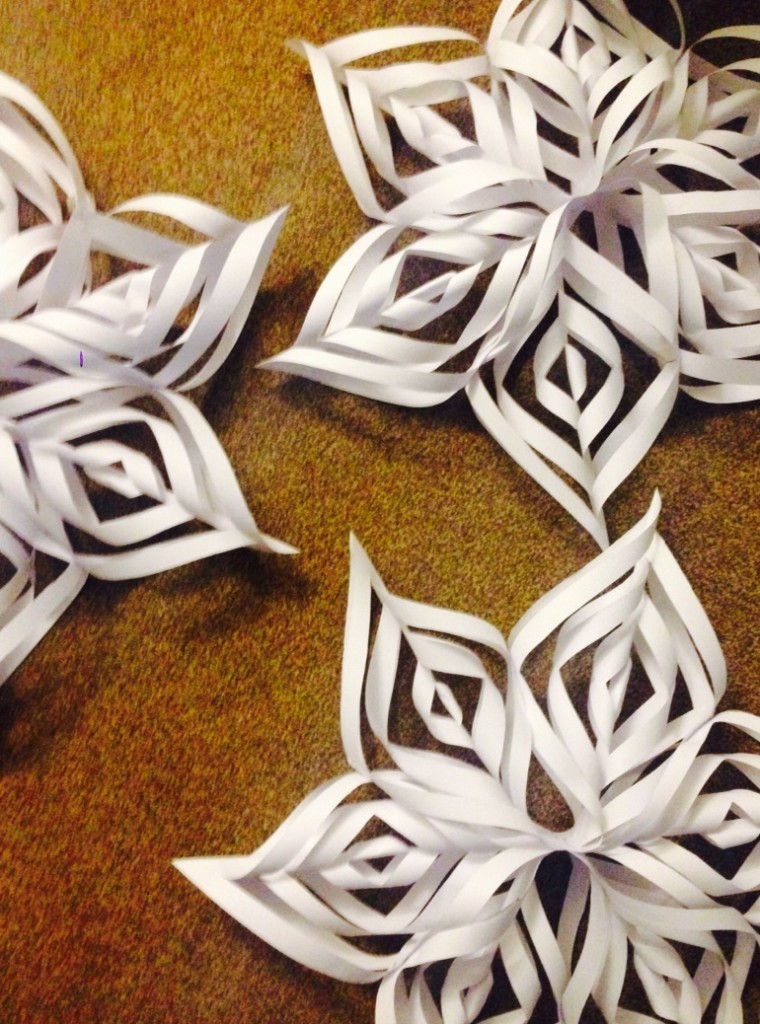 Around the rest of the room we had balloons galore and cut lots of silver paper onto strings to give the snow/icy look to it.  We then used these for Mayas actual birthday. 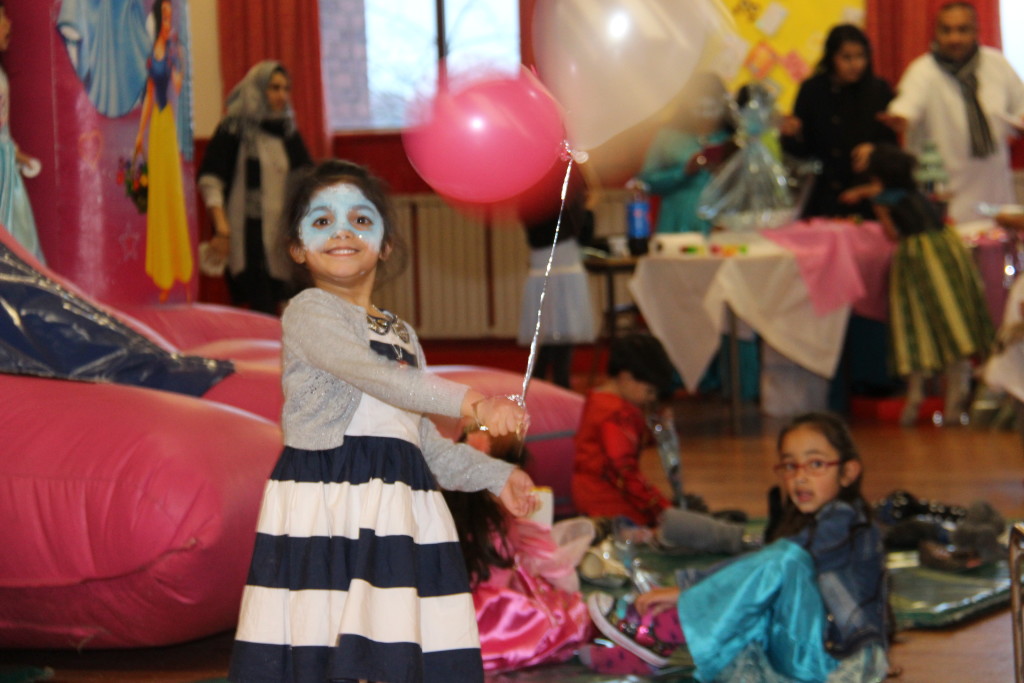 Chocolate fountain is such a simple thing but it always puts a smile on all the children’s faces.  My brother decided to fit in with the blue theme and made it a frozen themed chocolate fountain.  Such a simple but effective idea.  We had little jelly shots, we wanted blue ones but they do not stock them in the UK.  Next time maybe. 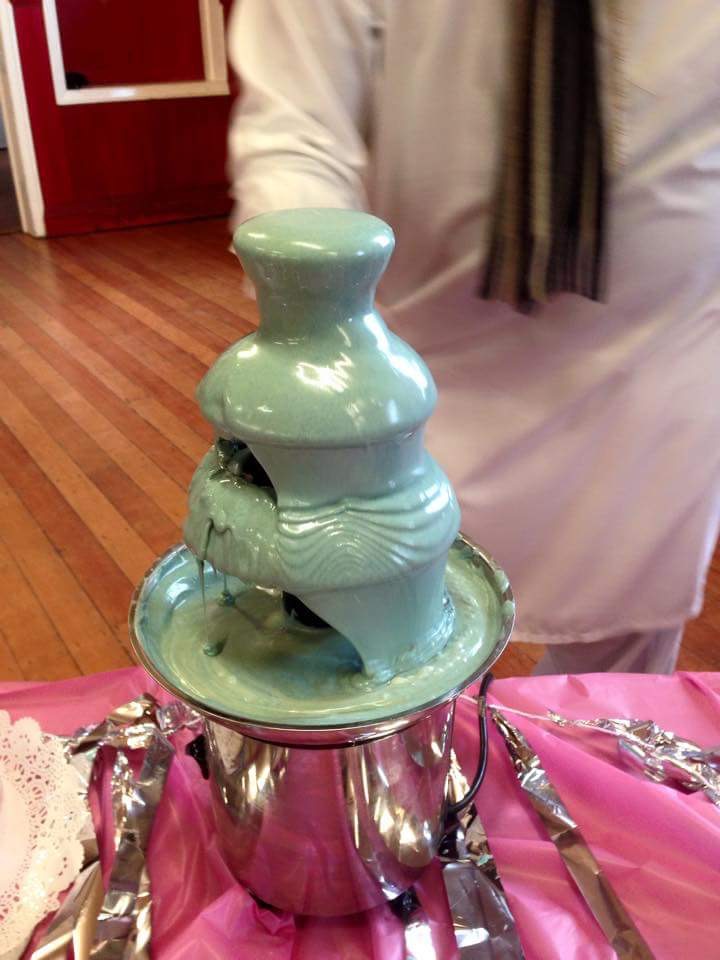 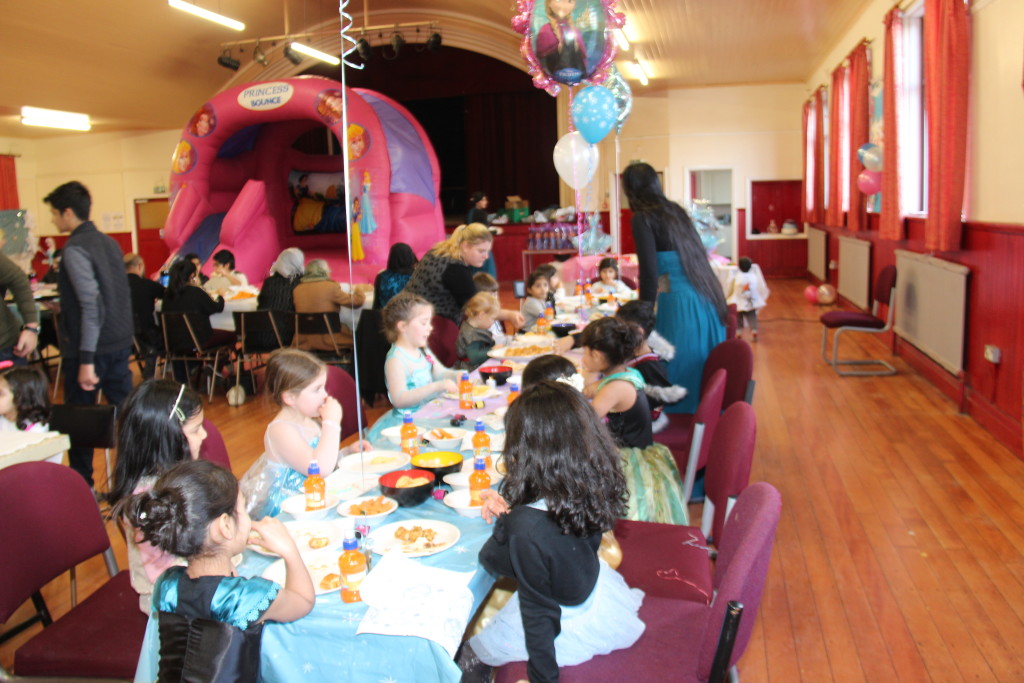 No event with asians attending would be complete without curry on the menu.  As we have so many adults at the birthday, we always have adult food and then for the children had snowflake shaped sandwiches, crisps, olafs noses. There were so many treats and activities on offer the children weren’t bothered in the slightest about this.  We usually have a treat table but decided to make icicle sweet cones with Frozen and a variety of other treats.  In the blue paper, i think they looked fab! 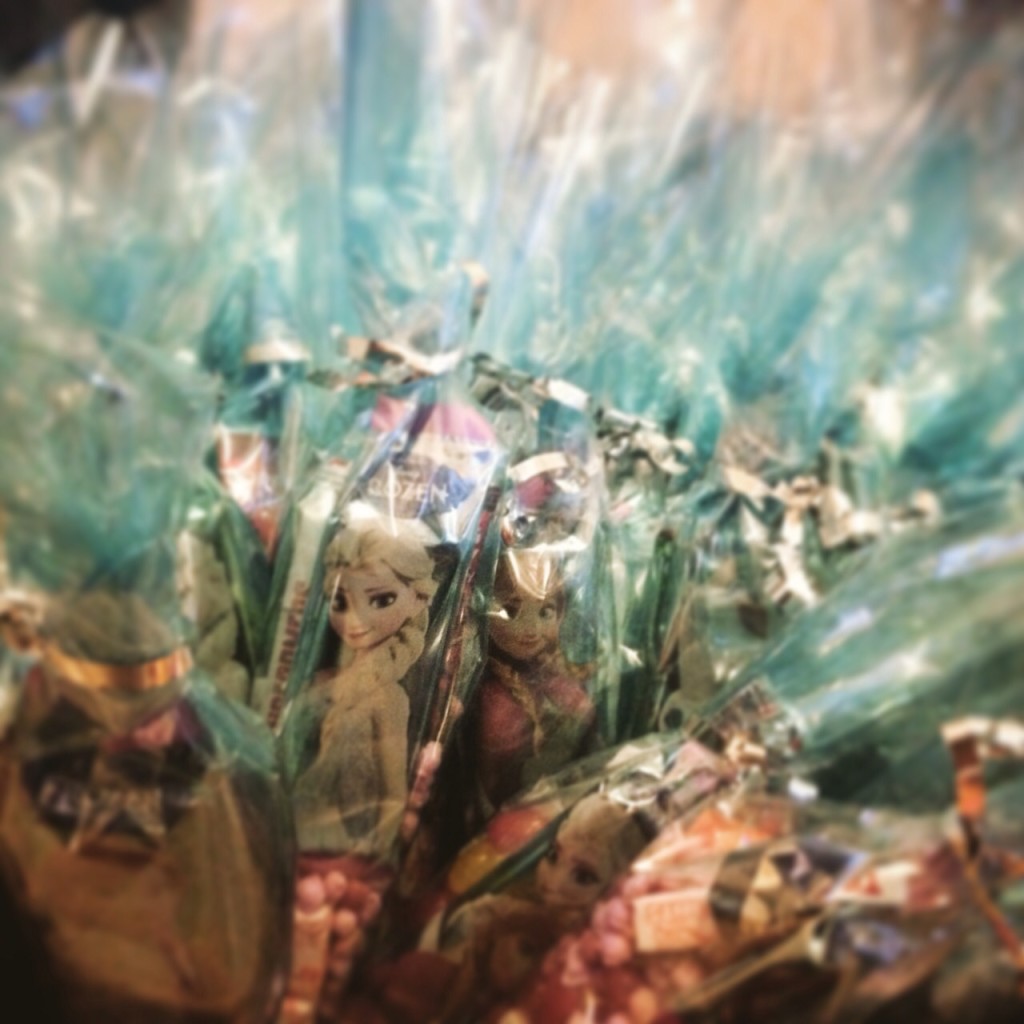 My sister is amazing in every way and I would be lost without her.  Everyone needs to be blessed with someone like her in their lives and she loves me and my little adventurers with all her heart.  At parties she is our face painter and she does a fantastic job on all the children, its not just about getting your face painted, she is literally the Pied Piper for kids, they all flock to her.  We always have huge queues of excited children waiting for their faces to be painted.  This year we also predesigned badges that the children could personalise and we let them make them into badges.  We had a great badge machine that actually lasted so the children got to take them home and the children loved watching them being made. 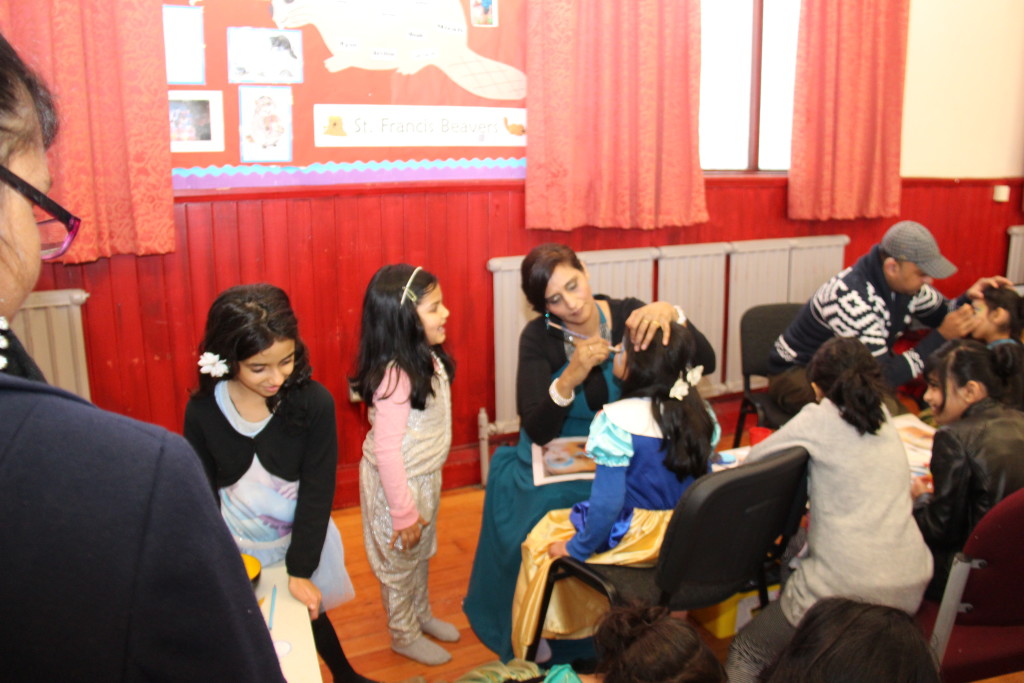 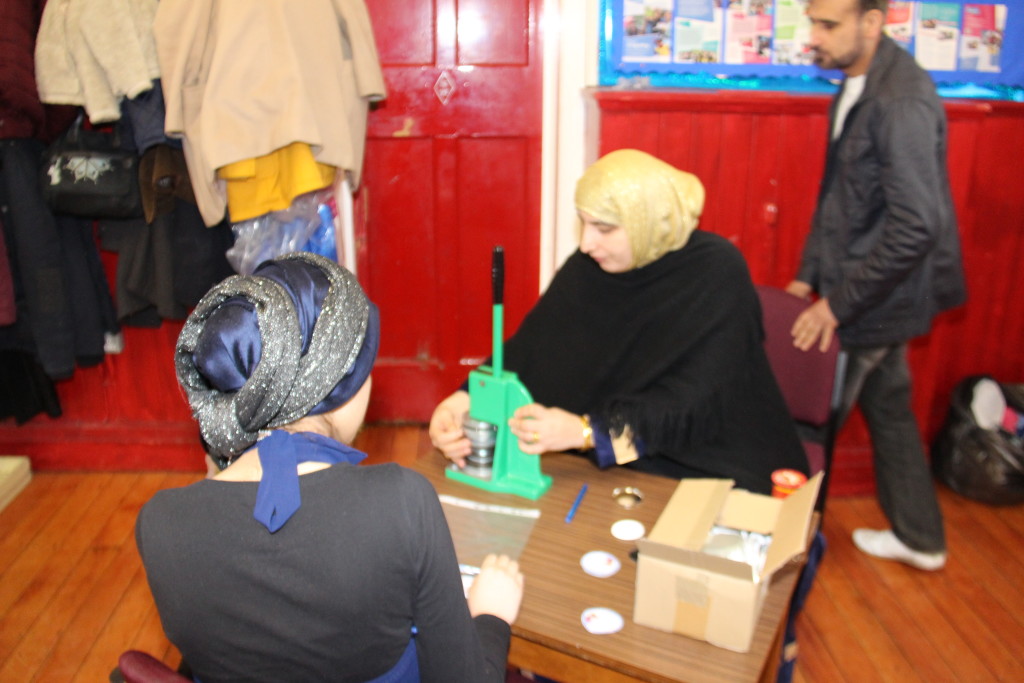 One activity which unfortunately didn’t work was painting snowflakes with Epsom salt on Black paper.  I am not sure why it didn’t work, maybe the water wast hot enough, or perhaps it was the fact that we were using black sugar paper.  The activity was supposed to be painting with Epsom salt and water solution.  Once the Epsom salt starts to dry it crystallises so giving the impression of icy/snowflakes.

Alongside these activities we had the children singing all the songs in the photobooth and it was truly awesome.  It was great as Doc would start an impromptu sing-a-long of the Frozen songs and we would have 30 children stop and break into song.  It was so much fun and the kids absolutely loved it! 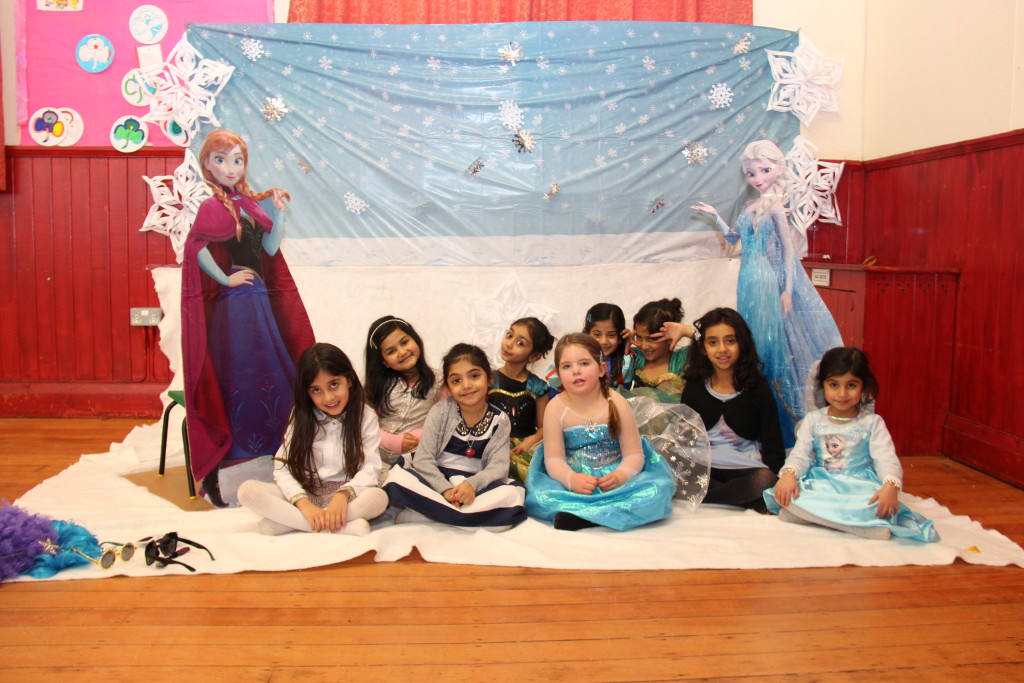 We have a huge bouncy castle with a slide which was a bargain at £50 for 5 hours.  The kids spend hours jumping around and it never gets boring, plus being indoors means that they are free to grab another treat / play a game when they want a break. 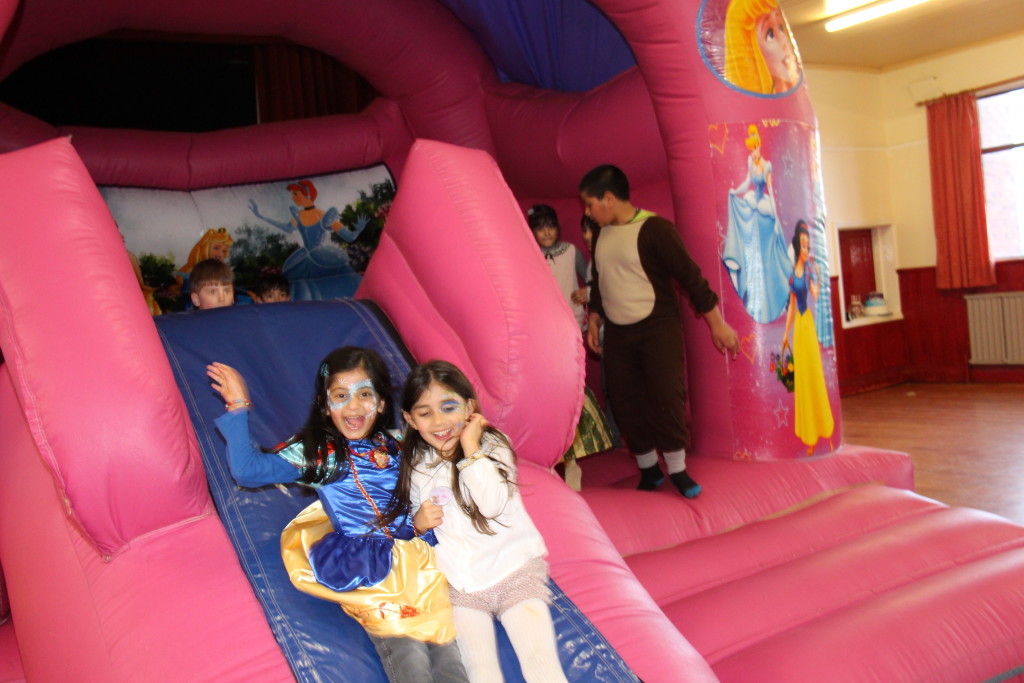 Games are legendary at our parties. We like the traditional and more jazzier ones too.  We had a few frozen themed games: 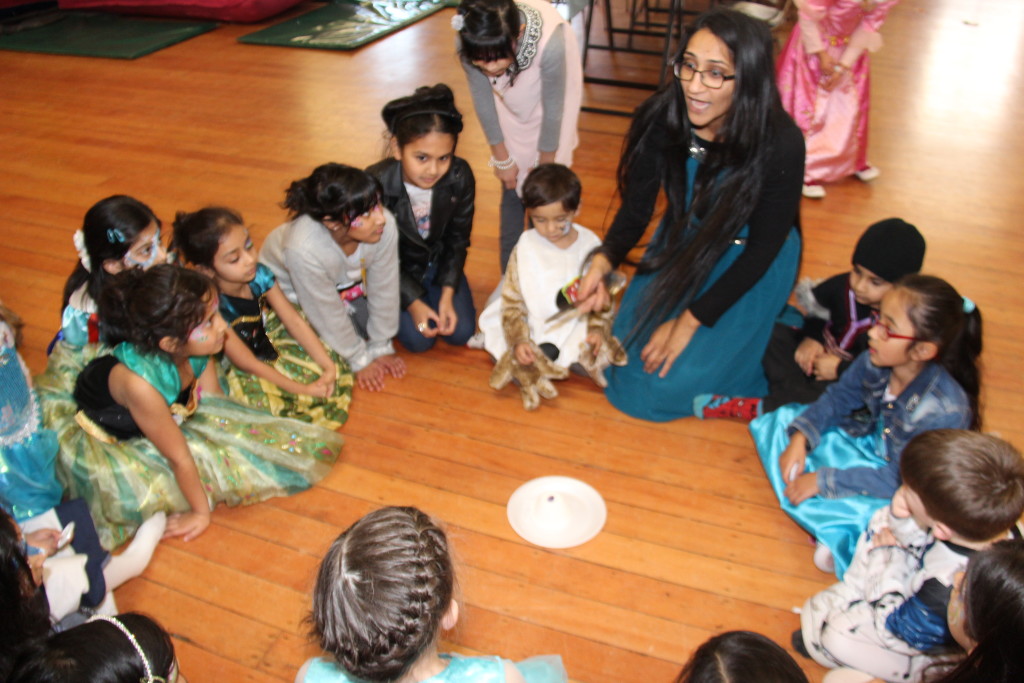 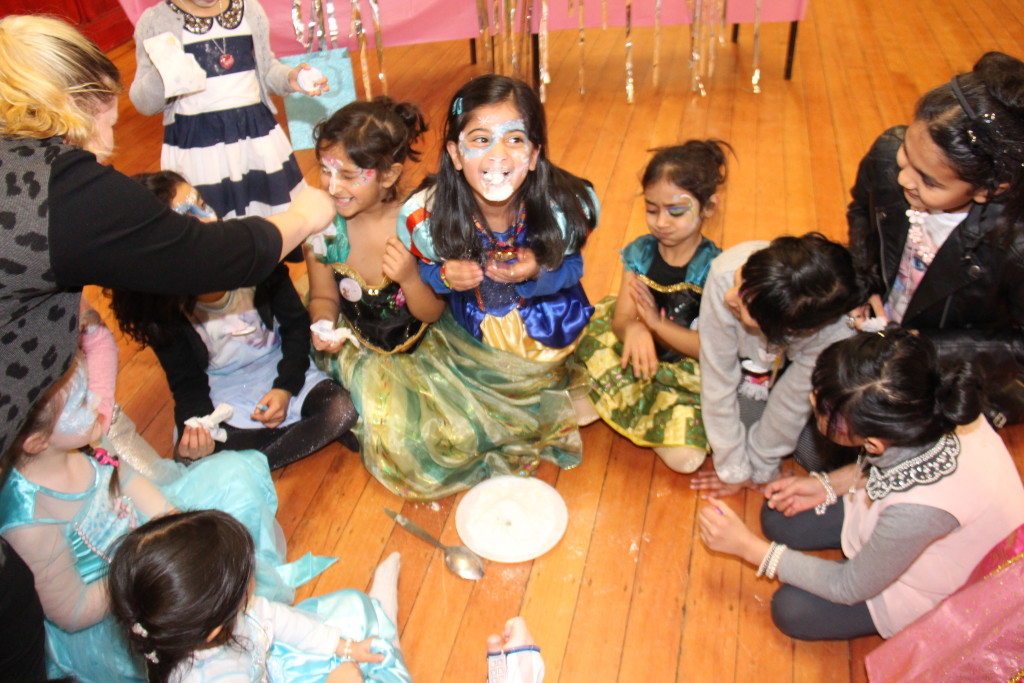 I had so many other game ideas but there wasn’t enough time to play them all.  If anyone needs any games ideas, just let me know via the comments below.

Party favours are always a controversial thing.  I don’t agree with them to an extent if they are filled with things that are never going to be used and just end up in the recycling bins.  But I do like to give a gift to the children attending.  This year I found these gorgeous Frozen bags and it worked really well as the children put the things they won or made inside, instead of losing them and then it being a mad search at the end.  Inside each of the bags the girls got a loom kit that was on offer.  The older children got these fab 3D models of the leaning tower of Pisa to make at home and the youngsters all got an In the Night Garden annual and plus a big slab of cake each! 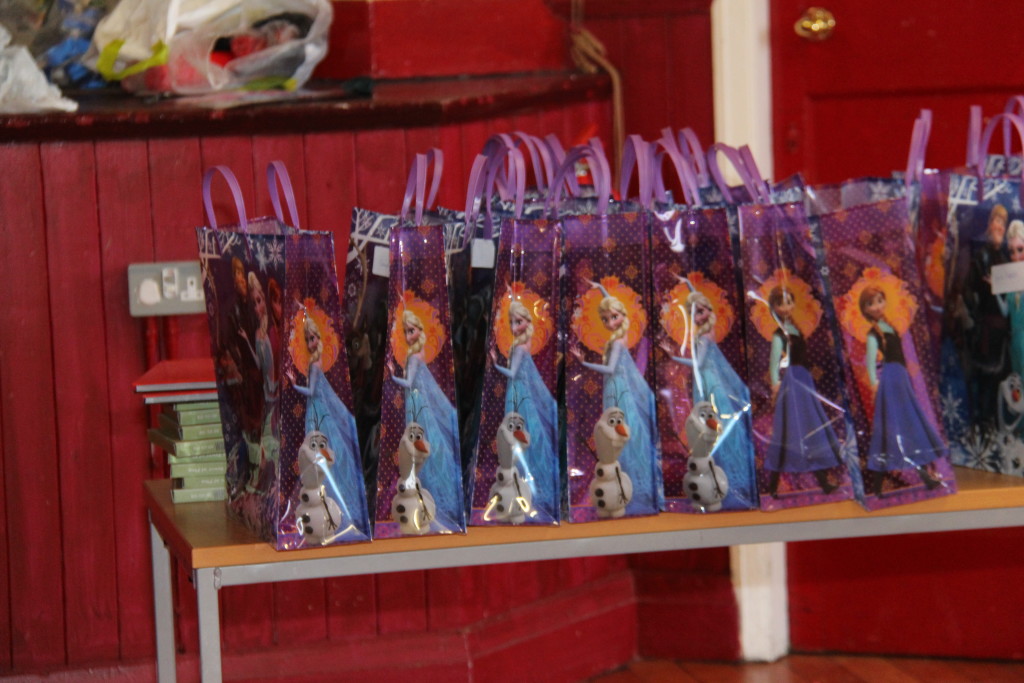 All in all the party was a huge success, and how do I know? Because my little adventurers were full of smiles and glee and Maya went to sleep with the most content look on her face.  She awoke an hour later to thank me for throwing her the best party ever.  Those words alone made my tired feet and exhausted mind recover in an instant and jump with heartfelt glee! As I sat there on Sunday evening, I was really grateful to have been blessed with such an amazing family, so thank you all for making my babies have an amazing day.