Review of To Kill a Mockingbird

To Kill a Mockingbird has been one of my all time favourite books for as long as I can remember.  Having read the story for the first time during my GCSE’s, I was totally blown away by the fantastic story of the Finch family. Harper Lee’s story and characters have stood the test of time leaving a lasting impression on all those who have read the book and will always remain one of the 20th Century’s’ most loved story.  When I saw that the book was going to be performed at the Octagon theatre, Bolton I couldn’t wait to see one of my favourite reads being acted out on the stage.  Below is my review of To Kill a Mockingbird. 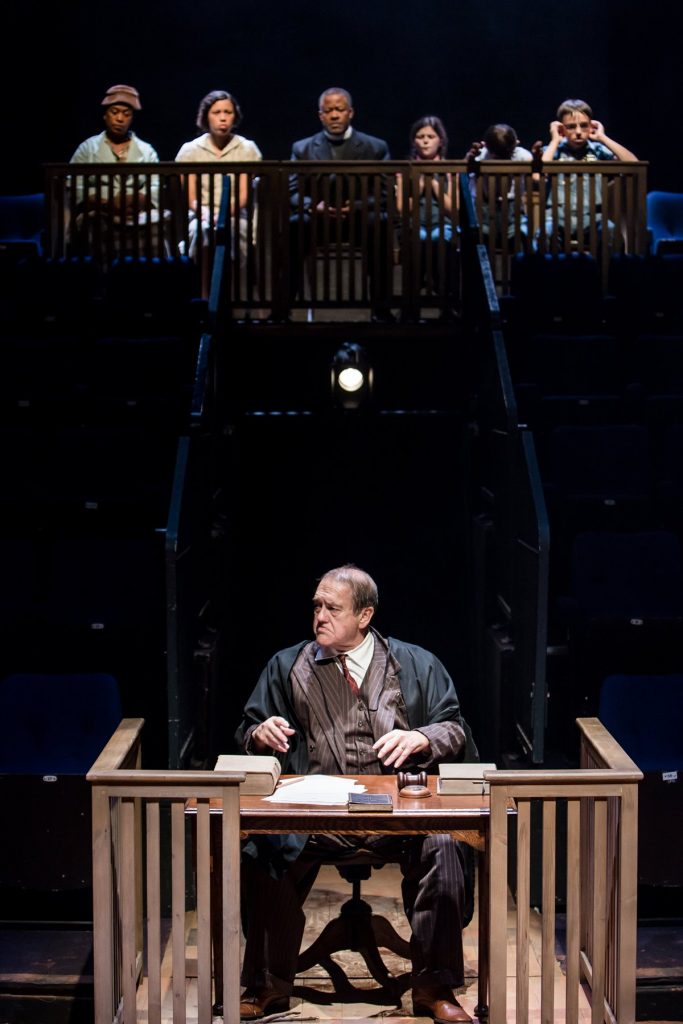 This was my first visit to the Octagon theatre and I loved the setting, despite being smaller then some of the other north west theatres, the intimate setting really made the the story really come to life.  The scene is set with the stage in the bottom centre of the round theatre, red sand covering the floor, helping to transport you to the small town in summer. Once the performance started, the actors used the entire theatre from the balcony and staircases, really adding another dimension to the story and making it an immersive theatre experience for the viewers.  One of the things that I loved about the book was how you really felt involved in each scene, as the picture was painted so vividly by Harper Lee.  The setting of the Octagon theatre highlighted this aspect of the book perfectly. 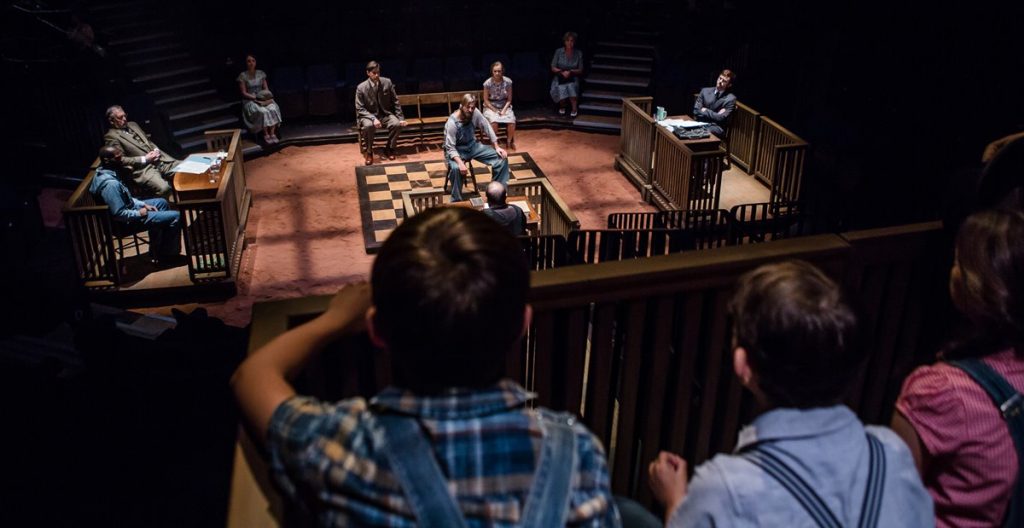 To Kill a Mockingbird, tells the story of ‘Scout’ and her brother Jem, set with against a backdrop of a small town in Alabama with racial tension at an all time high.  The story retells the town lawyer, Atticus Finch, respected by many of the town, but now under much public scrutiny for defending, Tom Robinson a black man, against allegations of rape and assault.  The story is much more then then the case but how the need to defend those who are innocent can lead to battles both in the courtroom and everyday life in the community.  In the performance, the story is viewed through the eyes of the protagonist Scout, both in the form of an older and younger actors, both of whom put on wonderful performances.  As I watched the story unfold the characters of Scout really captured the essence of the youth of the younger scout and the sad reflection of the older self.  I loved how both Scouts being on stage really helped the story to flow and it was an interesting way of showing both the past and present and really worked well. 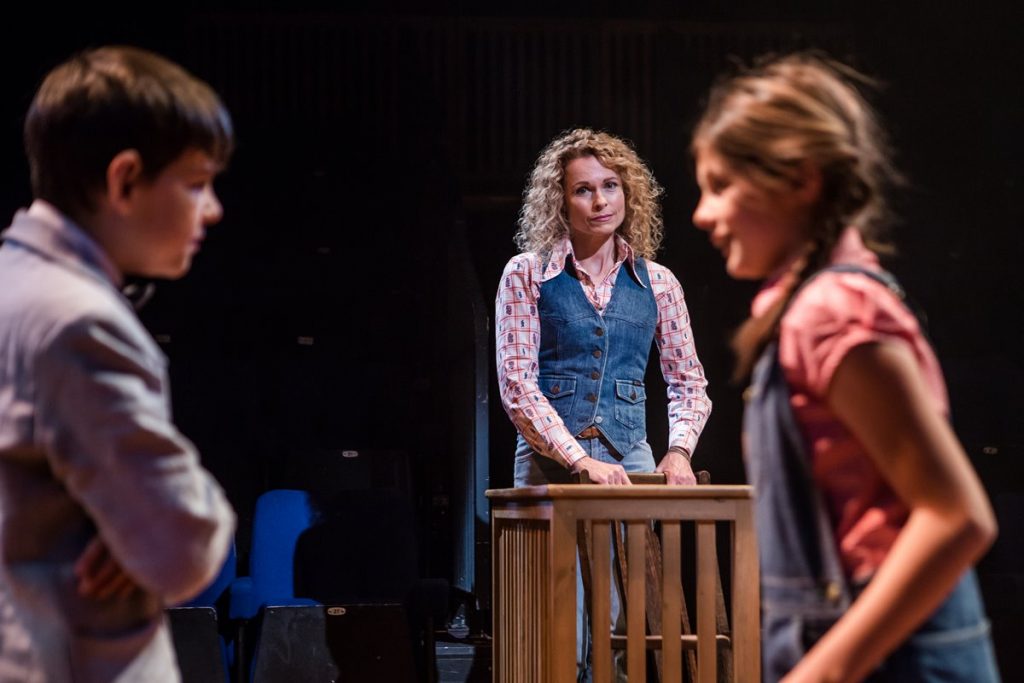 My favourite character was always Atticus and was one of the reasons why I wanted to be a lawyer.  Both firm but always compassionate, reasonable and seeing the right path when others were blinded by the darkness.  I loved the character stand up for what was right despite the majority of the community were opposed to his views.  The actor, Rob Edwards was fantastic as Atticus and acted out the role just how I always imagined. 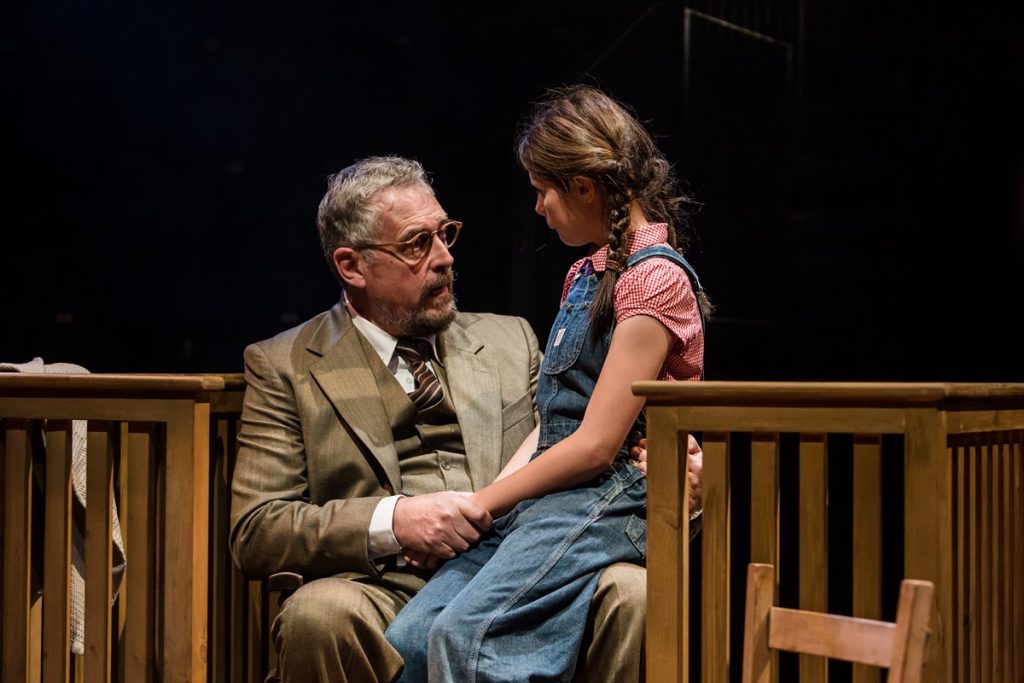 The set deserves a mention as though simple it was so effective in showing the scenes of both the street in which the Finch family resided and also the courtroom and really transporting the audience from a theatre to Bolton to a small southern American town in the height of a stifling summer.  The court room was a real highlight part of the story and the actors and production team excelled in these scenes.  The round theatre really lent itself to getting the viewers  involved and the actors circled around the the stage, during the examination and cross examination of witnesses and all sections of the audience would get glimpses of the characters and really be part as the story unfolds. 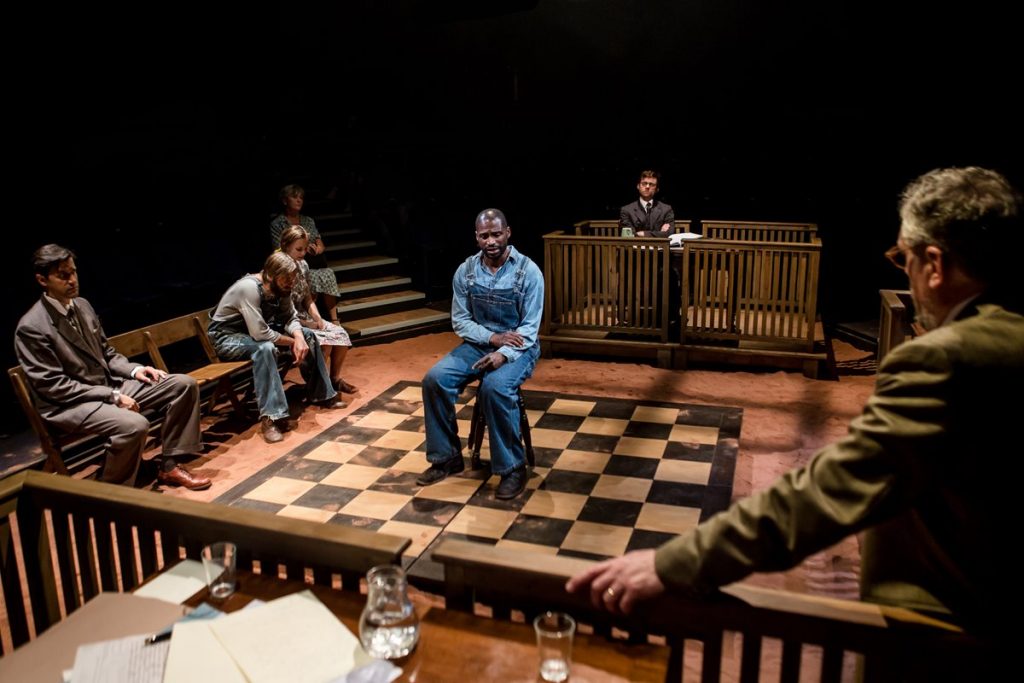 Given the current political climate in the UK and abroad, it is sad that a story set in the past can still hold true today.  Racial tensions have never been as high as they currently are and it shows that despite being in the 21st century, prejudices and misconceptions continue to increase on a daily basis.  The story of To Kill a Mockingbird remains as important today as it has been and in some ways lots can be learnt from the Finch family, their outlook on life and how they went about their daily life.  I loved the performance and it captured all of the magic of the book to a tee.  If you get a chance, I would wholeheartedly recommend that you book tickets, you will not be disappointed.

To Kill a Mockingbird is showing in the Octagon Theatre until Saturday 15th October 2016 and tickets can be booked here.