We have visited the circus on several occasions with our Merlin Passes but our visit to the Circus in November was as a Group Scout Leader taking a group of Beavers for a sleepover at the circus! Part of our sleepover included tickets to watch the Blackpool Circus Pantomime Pinocchio and it would be the first time we had visited the circus over the festive period.  We visited with children aged between 6 – 8 years old and thought this would be the perfect age for this performance.  Before the performance I wasn’t sure whether a pantomime would work within a circus arena / act, with Mooky the Clown as the lead and how it would incorporate the circus acts within the show.  However, I needn’t have worried as we were all really impressed with the show with the setting and acts really making the show stand out compared to traditional pantos which have previously watched. 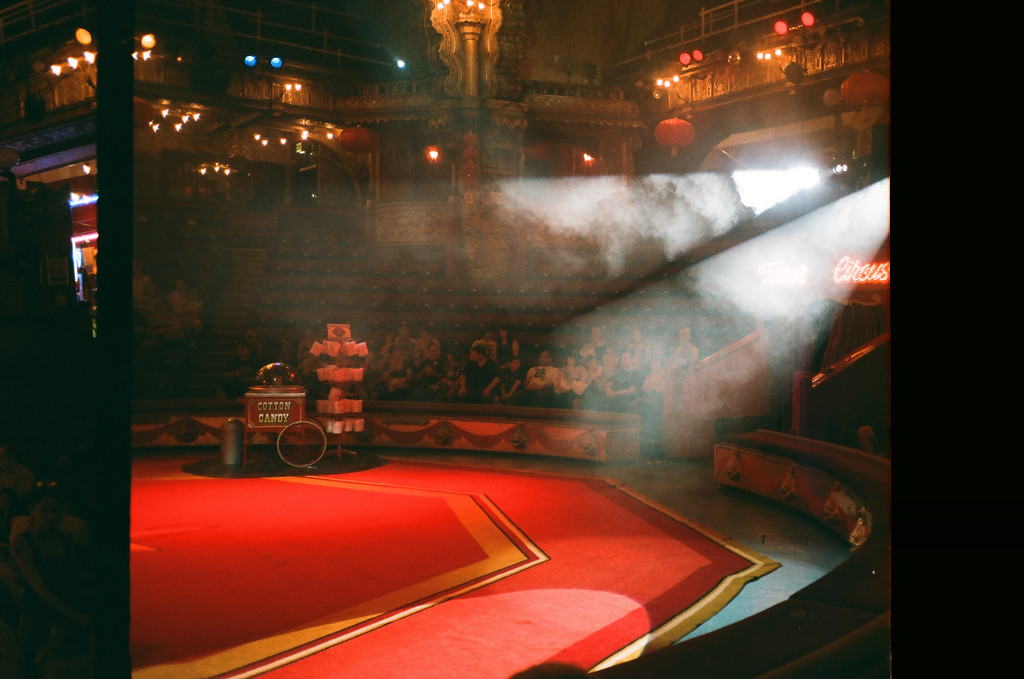 Firstly a mention of the circus itself.  Blackpool circus was opened in 1894 and is actually the oldest permanent circus in the world.  I love the building (I remember visiting fro Primary school many, many moons ago) and it has so many historical features and has been so well maintained and its a truly a treat to visit.  The children slept on the circus floor at night but visitors to the panto can go into the middle of the circus during the interval and have your face painted and photos taken with Mooky.  At the same time you get to really admire the building.  I think its really lovely that the children are still able to enjoy buildings like ths and it was a lovely setting for a a show.  I also love the circular layout of the circus so regardless f where you are sat you will have a clear view of the show.

The circus was  loose retelling of the story of Pinocchio and Mooky was fantastic as the lead.  It was great to see how captivated the children were with Mooky and he went to great lengths to really engage the audience.  I compare this to traditional pantos that we have seen and I think the lead is often not the most memorable of the characters so it was a refreshing change.  I loved how the show made it relevant for today’s children and had a X factor style contest to show their skills.  The judges were hilarious and I loved the little snippets of the contestants that came on the screen before each did their act.  I did wonder how the panto would deal with the whale scene and this was the most impressive of all the elements of the show.  I will not spoil the surprise but this part of the panto was truly amazing to see and your children will be totally wowed!

The circus acts were incorporated perfectly into the show and the performances were truly breathtaking.  The children were all on the edge of their seats as they watched some heart stopping acts.  The couple during the first half were amazing, especially balancing his partner on his head, and the lady with the hoops deserve a special mention.  Both of these performances (along with the others) were real world class acts and really made the panto stand out compared to other shows and gives you the experience of seeing a great circus and well finished Panto in one.  I personally loved the magical version of Hallelujah, and think the singing, dancing and acrobatic elements worked so well to create a great visual impact.  And in the true Christmas Panto style, the show finishes with a hilarious rendition of the 12 days of Christmas.  The adults and children (plus the actors) were laughing so much.  It was the perfect finish to a great show

We loved the show and will definitely be taking my other two adventurers to the show next year.  The Panto is more expensive then most pantos  but it is a real day out and the show was fantastic and one of the best I have seen.  There is also lots of additional activities that families can do in the tower (payable separately) so you can make it into a whole day out.  If like us you have the Merlin Pass this is included within the pass and you can use the rest of the tower’s activities for free too!  The Blackpool Circus Pantomime is highly recommended!!