Anyone who reads our blog knows how many car miles we tot up during our many adventures! Fortunately we have been blessed with pretty awesome little adventurers who are great car travel companions.  However, we are always on the look out for great ideas to keep our little ones entertained during the car journey especially when there are lots of miles to cover during one day.  It’s often when you least expect it, they decide to have a mini tantrum so it’s great to have a few things to hand to ease the tears and tantrums!  When we were sent a pack providing games and entertainment for the car journey, we couldn’t wait to give the pack a whirl.  Heres what we thought of the travel games for car journeys!

The car games have been designed by icarhireinsurance who specialise in giving individuals piece of mind by providing insurance for their hire cars.  The company have devised a number of games to help families have more fun and a more enjoyable time when travelling in the car.  There are a number of games which are free to download here.  The pack we received had lots of copies of downloadable games, a pen, crayon set, a clipboard and a Disney CD with lots of Disney movie classics.  I was most excited about this CD as the little adventurers know all the new Disney songs but not so many of the older ones.  So I think it would be a great introduction to some of the most well known Disney classics.

On our recent journey to the Imperial War Museum North we decided to give the pack a test as it would be an hour journey each way.  As we only had one clipboard the other children used hardbacks books to lean on. We started with the bingo game which was a resounding success.  We had a 4, 6 and 9 year old playing and there was pin drop silence in our car as they were looking for the items.  The images were nice and clearly identifiable which meant even someone like Raihan could have a real go.  We gave the children the task of completing one row and then how could complete every image on their page.  As we were mostly on the motorway it was harder then it would be in towns but it made the game much more fun as things were a lot more scarce and went past a lot quicker so you really needed your wits about them :). I really liked this game and it pull be perfect for children aged 3 and up so means that you could cover quite a range of children. 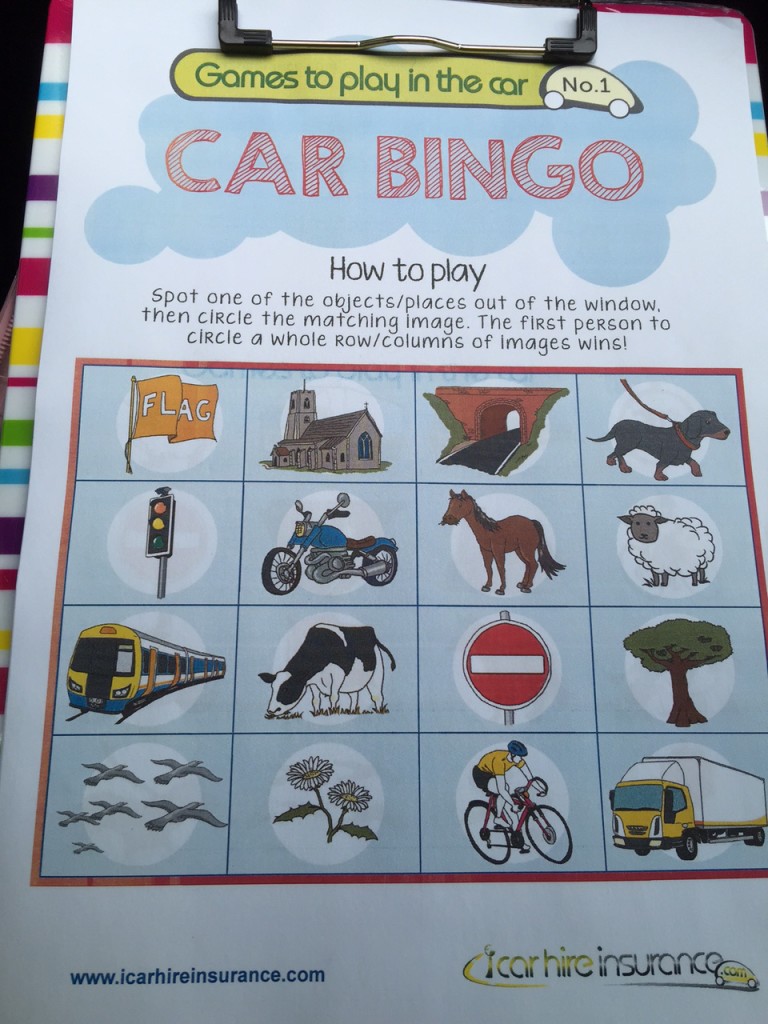 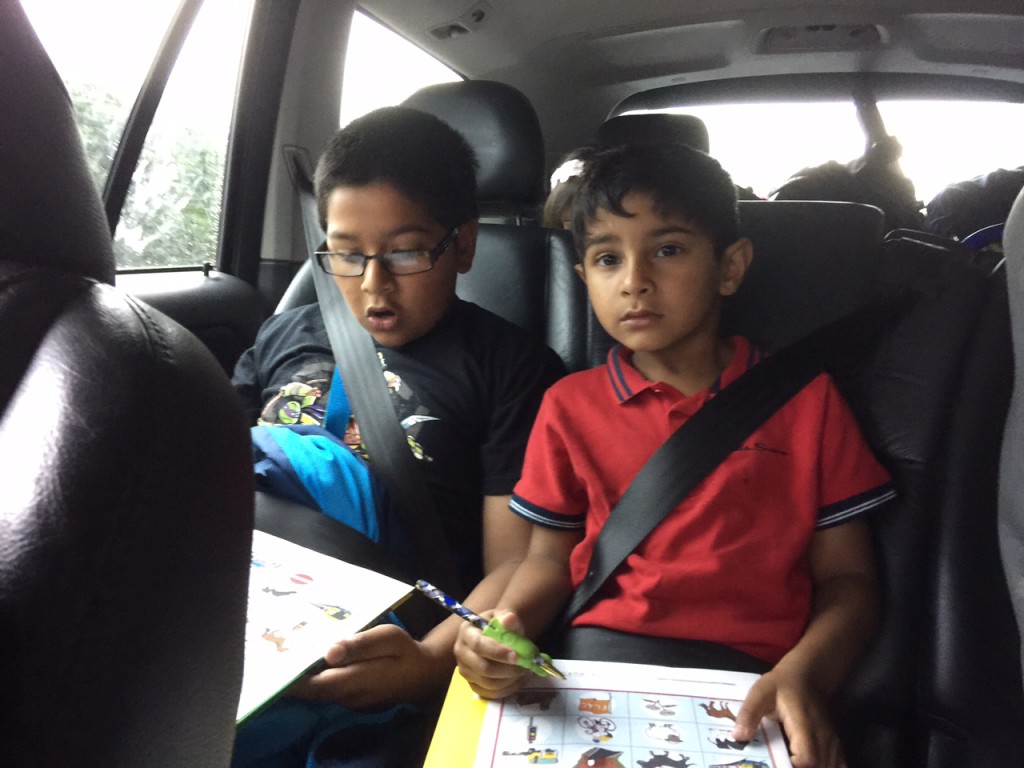 The second game we tried was consequence.   I think this was a lot harder to play in the car especially when you have younger children and we had never played the game before.  Raihan didn’t really understand what he was supposed to do and hiding it from the person sat right next to you in the car was proving to be difficult.  With hindsight we should have played that game at home first as it was a new game to the kids so will definitely try this again when we go on our next car journey. 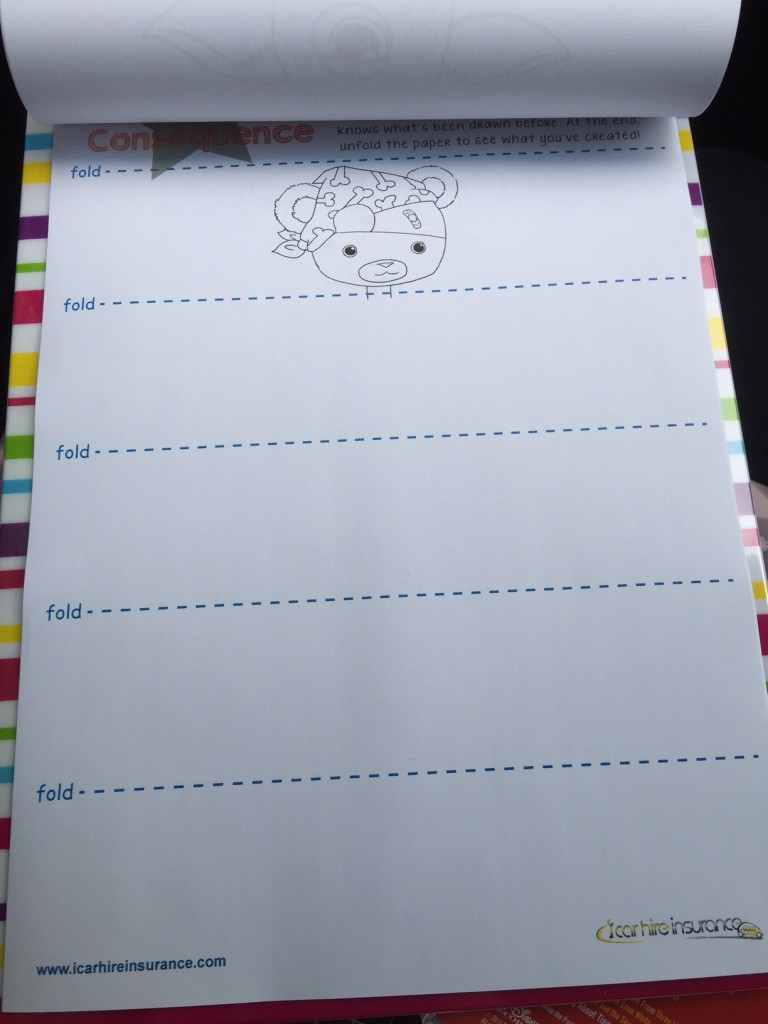 The final game we tried was the car search game.  Maya and Armaan gave this game a real go but on the motorway it is quite hard as cars as zooming very fast and the logos are quite small. This game would be suitable for children aged 5/6 years old plus as they will know a few cars names and know some of the logos.  That said our kids got really competitive and kept shouting out logos and names the entire way home. 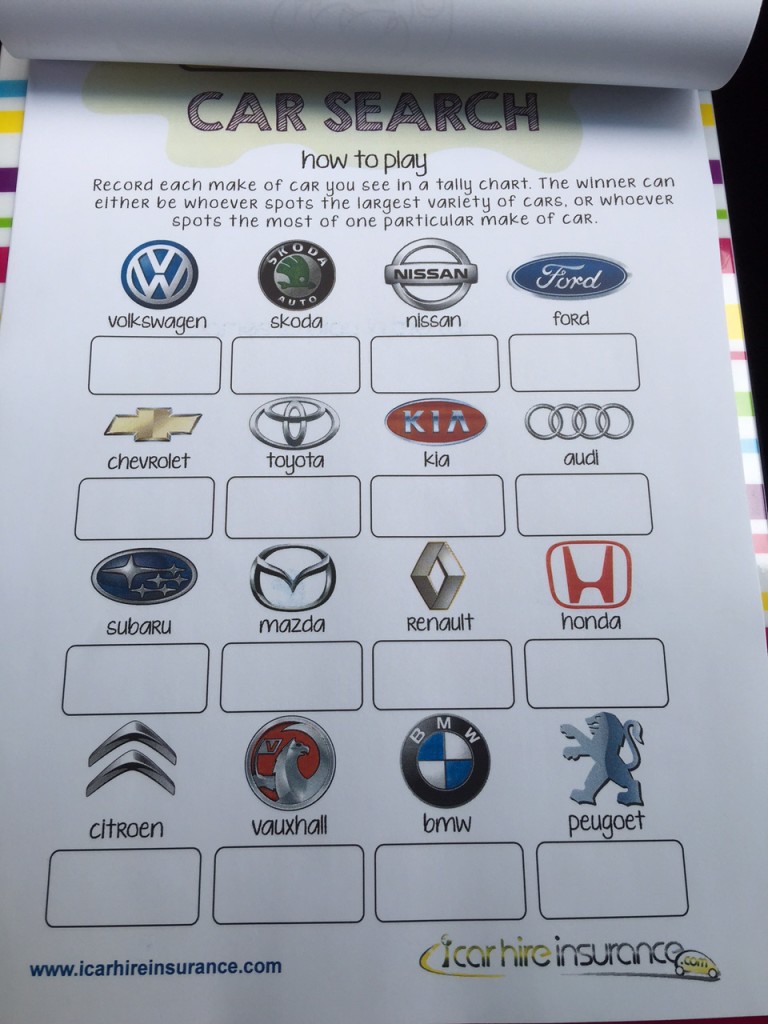 I have since printed off copies of the logo game and gone for a walk with the kids and we have been spotting the car symbols.  As the kids have learnt a few more it has made it easier to spot these cars when we see them again.  I would recommend that if you are using these car games with younger children to have a play at home first.  I can imagine it being very frustrating explaining the game to them whilst they are driving and lots of tears following if they aren’t really sure how to play and you won’t be a position to help the either!

We still have a few games still to try which is illustrative of how much the children enjoyed the games and the time they spent on them.  We are looking forward to giving them a try next week on our theme parks road trip.  I would recommend downloading and printing off the games and making a pack like the one we received, with a few pens, colours, clipboards and storing it in a plastic folder in your car for future trips.  It is an inexpensive way of entertaining the children and unlike modern technology there is no need to charge or update it.  It is simple old fashioned fun and the children will love it.

Overall I think these games are a great resource, free to print and readily available to families going on long car journeys.  I often see too many children watching electronic gadgets for hours in the car and I love that these games are on paper and kids are keen to look around them and notice all the fab things on the journey.  I would recommend them to everyone and it is a great way to pass an hour or two.  We are going to have prizes for the next time we use them on our way to London.    The link to download the games is provided below

Do you have any ideas of how to entertain the children in the car on long journeys?  What did you think of the downloadable games?