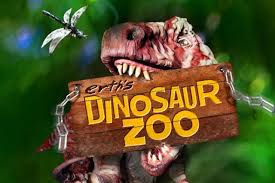 Today, after much drama and trepidation (we can never have a day pass without some major calamity be falling the family) we finally arrived
in Manchester to attend the matinée performance of Erth’s Dinosaur Zoo at the Palace Theatre.  As you know, Raihan’s in love with the prehistoric creatures and the little adventures were very excited to be going to watch the show.  I’ve lost count on the times we watched this video here.  Doc and Zayn were unable to make the showing due to family illness so it was me, Maya, Raihan and my nephew Armaan.
The Palace Theatre is a fantastic setting and I have been to a number of great shows here over the years but this is the first time we attended with the children.  We were in the stalls (Row G) which were perfect so you really get the feeling of being up close with the dinosaurs.  I love the effect when the curtains are lifted and the immediate silence  that falls around the audience and the children hungrily staring around the stage. 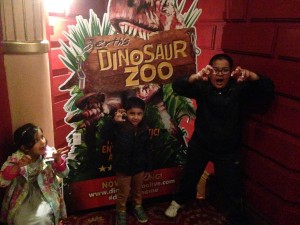 The show focuses on Aussie Zoo Keeper Lindsey, whose here today to share and inform the audience about the dinosaurs that roamed around the Southern Hemisphere.  I love the way she stresses that despite them not being as well known as those in the Northern Hemisphere they are as equally scary, ferocious and in some cases bigger then the northern counterparts.  The Zoo Keeper is great at making jokes for the adults to enjoy and feel involved in the show and also to make the show more interactive for all the audience.

The Dinosaurs, even though the audience are informed they are puppets (followed by a hilarious moment when the keeper then goes on to say that due to your short attention spans and TV you will have forgotten this fact by….now) the children get so engrossed in the show that despite knowing they are not real there reactions show that they have forgotten this fact.  It just added to the magic of it all as I looked around, the glee and reactions of the children were  as though they were seeing the dinosaurs in the flesh.  One particular moment was when Raihan who was so totally convinced of them being real that he was shrinking quietly in his seat and looking rather scared.  The show is really well performed and the illusion of the dinosaurs, their movement and sound are not diminished at all by them being puppets and the puppeteers do a fantastic job of creating the illusion that the children are seeing real dinosaurs.

The show does  have a lot of talking about the dinosaurs, explaining who they are, what they eat, size and where they are from and so forth.  Here, I could see Raihan (aged 3) switching off a little but for older children such as my nephew (aged 8) and Maya they were told a number of interesting facts (those involving poo, vomit and other gory facts are still being shared amongst the extended family) that its appropriate for the whole audience.

Over the show the children meet 5 dinosaurs so approximately 10 minutes is spent on each dinosaur.  Its great that they are dinosaurs which they would not normally come across, so we now have another few to learn up about at home.

The show has no intervals so make sure that the important things such as ice creams are purchased (oh, and visiting the toilet) before the start of the show.  The show is about 50 minutes long, but it felt much shorter and before we knew it they were saying good bye.  I think that shows how enjoyable it was. 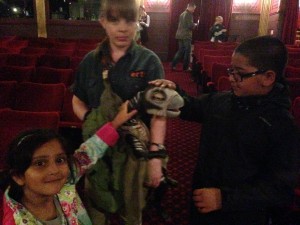 The interactive nature of the show.  It was so refreshing to see a show where about 15 people from the audience were chosen to get involved in the show.  Sadly despite Maya’s  various attempts of being chosen she wasn’t picked but compared to the other shows I have watched, this level of audience engagement and involvement was probably the most I have seen.  In addition, the children who missed out could meet a few dinosaurs after the show which was again a nice touch so pictures could be taken and helped appease the children who couldn’t get on the stage.

The Zoo Keeper: Her sharp wit was really good for the parents.  Having numerous lines for the parents to laugh along too throughout the show was great and again something which I think a number of family shows do not pay enough attention too because majority of them focus solely on the children.

The puppeteers: I was really impressed with how well it all worked.  I have watched other shows when Puppets are used but despite being able to see the puppeteers, in this show, it did not detract from the dinosaurs and in the case of the Leaellynasaura  and the Titanosaur, the dinosaur’s movement was flawless and really captivating.

Things to be aware of:

talking: there is a lot of talking with the zoo keeper informing the audience about the dinosaurs.  Don’t get me wrong, this was shown in a fun and engaging way for the children but if your children are young (like Raihan at 3) and switch off, you may be constantly trying to get their attention back on the show.  There is no music and so your child needs to stay focused on the show and 50 minutes is quite a long time.  That said, the zoo keeper does make it as fun as possible.

Number of Dinosaurs: Through the show you will meet 5 dinosaurs, so if you have ideas of lots of different dinosaurs running around the stage you and the children will be disappointed.  I think the show does a great job in properly showcasing the creatures that it has chosen and focused on them rather then inundating the audience with lots of different dinosaurs that would be impossible to remember

Noise/scare factor: If you have children who are easily scared, there are a couple of quite scary elements where a number of children were crying or parents took them out of the theatre to quieten them down.  Raihan was a little scared in parts and did scream a little but I had made sure he was sat with me and calmed him down.  Its something to be wary of especially if your attending on your own and you have a few children with you.  It should be noted that there is a lot of audience noise throughout the show so if your child cries/gets excited other audience members won’t be turning around to stare.

Not getting picked: This is one of the things with shows where children are chosen.  If you have a child who would get upset about not being picked, it makes for an hour of listening to your child complain.  In my view its character building and Maya got over it soon enough.

Overall, I thought it was great.  Looking back on the show whilst writing this review and also telling Doc about our day’s adventures, there was so many good things about the show and on reflection, the show was a really good family day out.  It is not the cheapest show (£15 per person, plus additional booking fee) you can take your children too, but once you look at the location (Palace theatre tickets are normally £30 plus), the quality of the show it is comparable to the other shows of a similar calibre.  For any dinosaur fans (especially those 6 – 8years old) I would recommend it.