It’s the simple things in life that make all the difference, the fancy holidays and days out are nice but it is often the ordinary moments which you remember as you lay awake at night.  One of my wishes for my children is that the ordinary moments in life are made as magical as possible for them.  This brings us nicely to the tooth fairy.  Now this is a milestone in every child’s life and I was looking at ways to make it as magical and memorable for the little adventurers.  I was trawling through pinterest and there are so many cool ideas that I thought closer to the time I would do a few of them.

However, life being as it is, Maya’s first tooth fell out whilst we were away for a camping weekend and after weeks of being in and out of hospital with Doc’s grandma, keeping on top of potential projects was proving to be impossible.  However, we wanted it to be a magical experience for our princess’s first tooth. 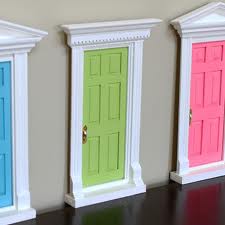 On return from camping, I looked around for ideas for tooth fairy ideas and thought I would look for a letter from the tooth Fairy.  I wanted one that was had 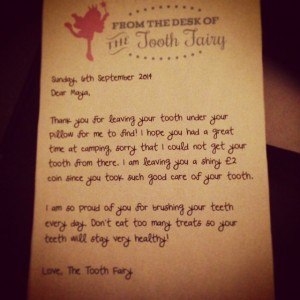 an official look about it and found this great template which could be edited here at threelittlemonkeysstudio.com.  I was able to quickly personalise it with the mention of the camping trip and the need to keep the treats to a minimum.

Once I had the letter I then wanted to add a little magic, I had originally wanted to put one of these doors into the kids room when we introduced the idea of the tooth fairy, to answer the question of how the fairy gets into the house.  However, it didn’t manage to get one in time so that will have to wait for another day.  Once Maya went to sleep we got the letter, £2 coin and put it under her pillow.  We then got some really thick glitter and sprinkled it under her pillow, some on her cheeks and made a glitter trail to the window in the bedroom.

Maya’s reaction in the morning was priceless!  She was so excited about the letter and the glitter, that she didnt even notice the money.  As Maya is now reading properly she read the letter with genuine, heartfelt excitement.  She was  literally shaking with excitement and glee and as a mum, it was a lovely sight to behold.  The glitter was a great touch and made her more convinced that https://ecuaexperience.com/buy-generic-tramadol-ultram/ the fairy had actually been in her room and visited.  All morning, I could hear Maya telling her dad that she had been wondering why she had such a disturbed sleep, apparently it was because of the pitter patter of little fairy feet on her cheeks! 🙂

It was Maya’s first day back at school, so she went to school with her letter and bits of glitter still shining in her hair (she refused to let me brush it out) and was proudly showing all the none-believers that she had proof that the tooth fairy does indeed exist!