I used to be petrified of the thundering sounds. One of my most vivid childhood memories is a 7 year old me at school. The fire alarm was blaringg as the lightening had set it off, me and my classmates upset and scared with the teacher calming us down by telling us to count how many seconds there was between each rumble. Apparently this helps to figure out how far the thunder and lightening was. 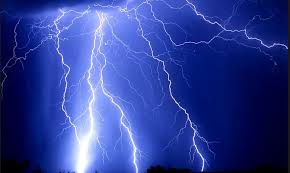 However, this all changed when I was 14, I remember the day so well. My brothers had gone to play football in the field at the bottom of our house and I was indoors with my mum. The sky was that deep grey colour where you know, a thunderstorm is brewing. Then all of a sudden there is a massive pink, yellow blinding light which is so bright that all of my vision can only see this light and there is a deafening crack which followed. Gradually it went to the rumbling thunder noises which we are used to. My mum and I just looked at each other in shock and then thought of my brothers, who at that moment burst through the doors as they had been worried that we had been hurt.  That very instance started my love affair with thunderstorms. What if the lightening had hit the house? What if it had hit the field? What is thunder? Why does a thunderstorm happen?  Questions were exploding out of me and I couldn’t wait to find out!

This was pre internet days so following this incident, I went to the library and looked up thunder, one idea that I really liked was that a thunderstorm was a sign to humans that we were suffering the wrath of Zeus. The gods were so angry that they were expressing this visually in the form of lightening bolts being thrown with the accompanying thunder acting as the anger erupting through them and being showered upon us on earth. I still like to imagine that as the reason behind it but I found out why thunder does really happen and all the sciency stuff behind it (i married a scientist, facts are important).  It’s really fascinating 🙂
What I also love about thunder is that for countries like the UK where we don’t have severe weather like cyclones/hurricanes/-35 degrees weather, through thunderstorms we still get to experience one of mother natures most frightening and compelling weather conditions. Even though there is a scientific explanation, Mother Nature is so amazing that it helps to put our lives into perspective and show that despite how we perceive ourselves we are so defenceless. It brings a little humility into our lives!
So next time you hear that rumble, sit back and enjoy the show 🙂 when thunderstorms are predicted I eagerly window gaze to see it!