The day we got stuck up a mountain with a baby

Picture this, being stuck halfway up a hill (the total height was 833 metres and we were at the middle station which is higher then Eiffel Tower, so still pretty high) a crying baby with a dirty nappy and no changing bag.  We had no food, water, struck on a tiny platform in the blistering heat of the Malaysian summer and the rescue cars would take between 3 – 5 hours… Oh what to do??  Carry on reading to find out how we got ourselves out of that precarious situation, of being stuck up a mountain with a baby! 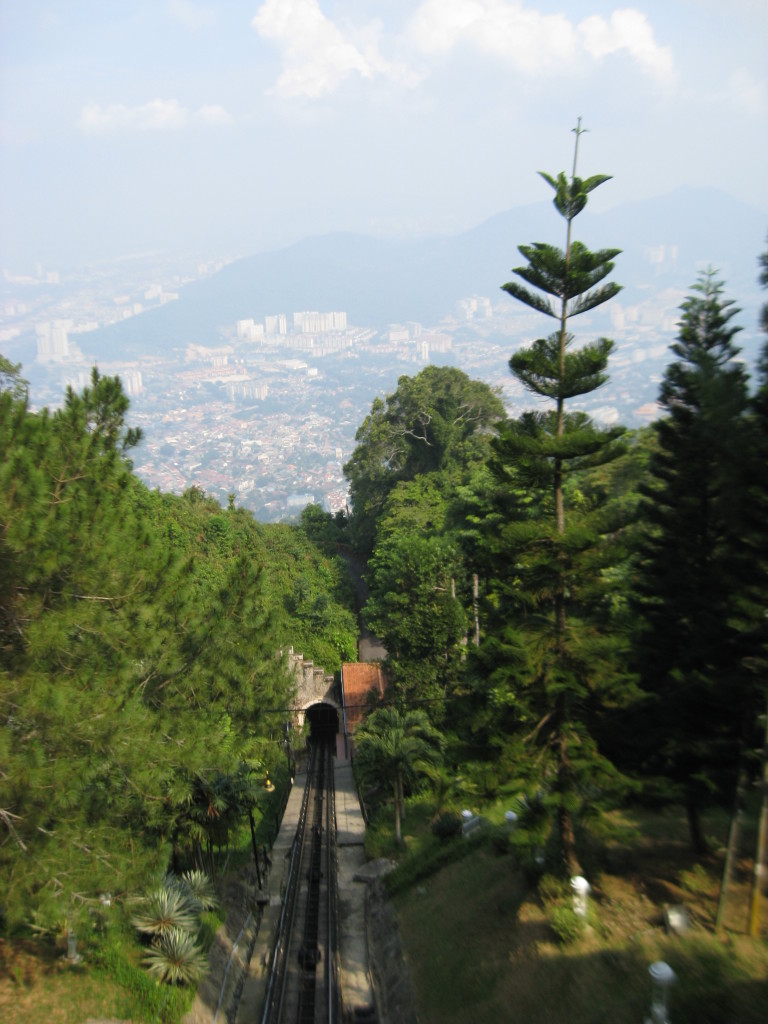 We were in Penang in 2009, Maya was 6 months and we had my sister and niece (aged 13 years old) with us on the adventure.  We were having a tour around Penang and included Penang Hill as it would be a great stop for my niece and offers fabulous views from the top of the mountain.  I had previously visited Penang with Doc in 2006 and it is a great way to see Penang.  We had a tired baby so we decided it was going to be a little bit of a whistle stop tour at Penang Hill and we stupidly decided to not take our changing bag with us  and instead left it in the tour car outside the front entrance. (New parent rookie mistake!) 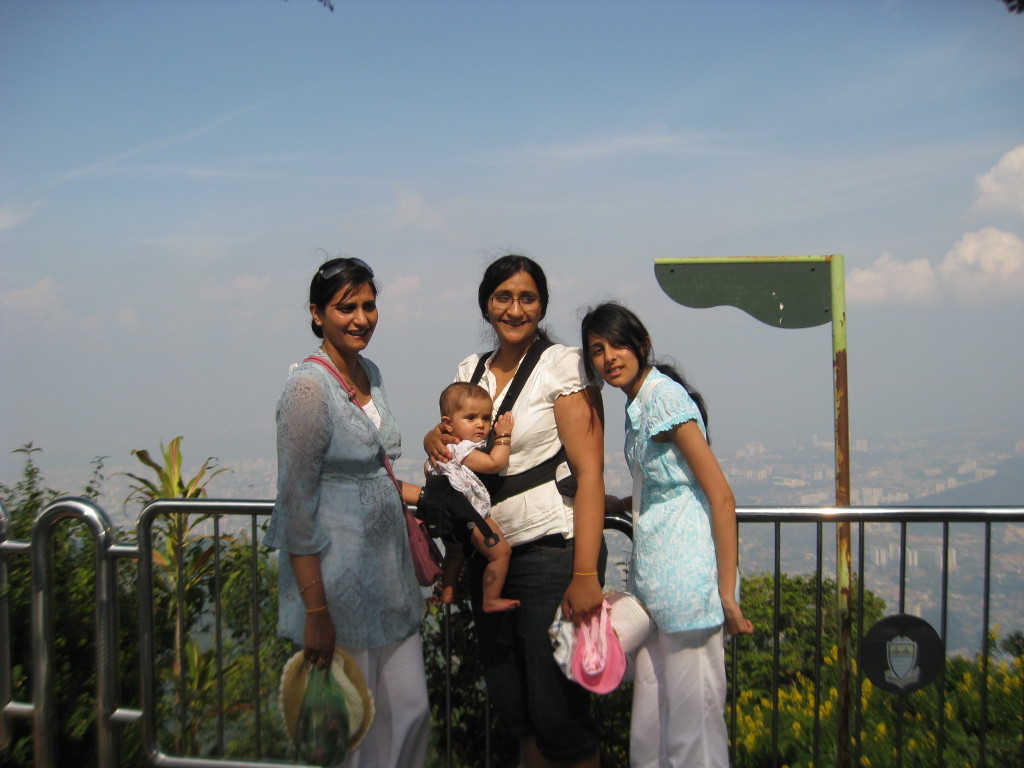 As we visited in 2009, Penang Hill still had the old tram system which you needed to change the train in the mid station.  The journey to the top was so easy little did we know what would unfold in the next hour  The top of the hill is fabulous, refreshingly cool air and such a change from the ground.  We took lots of pictures of the views from the top and enjoyed the time walking around and visiting the few shops. We then set off to make our journey down and arrived at the mid station.  As we disembarked from our train we were greeted by lots of worried staff members and knew that something was wrong.  We were informed that the tram had broken down on the way up to the mid station and as a result there would be no trains running for the remainder of the day.  Just at that time Maya decided to have an untimely dirty nappy so the need to get down was pretty much needed ASAP. 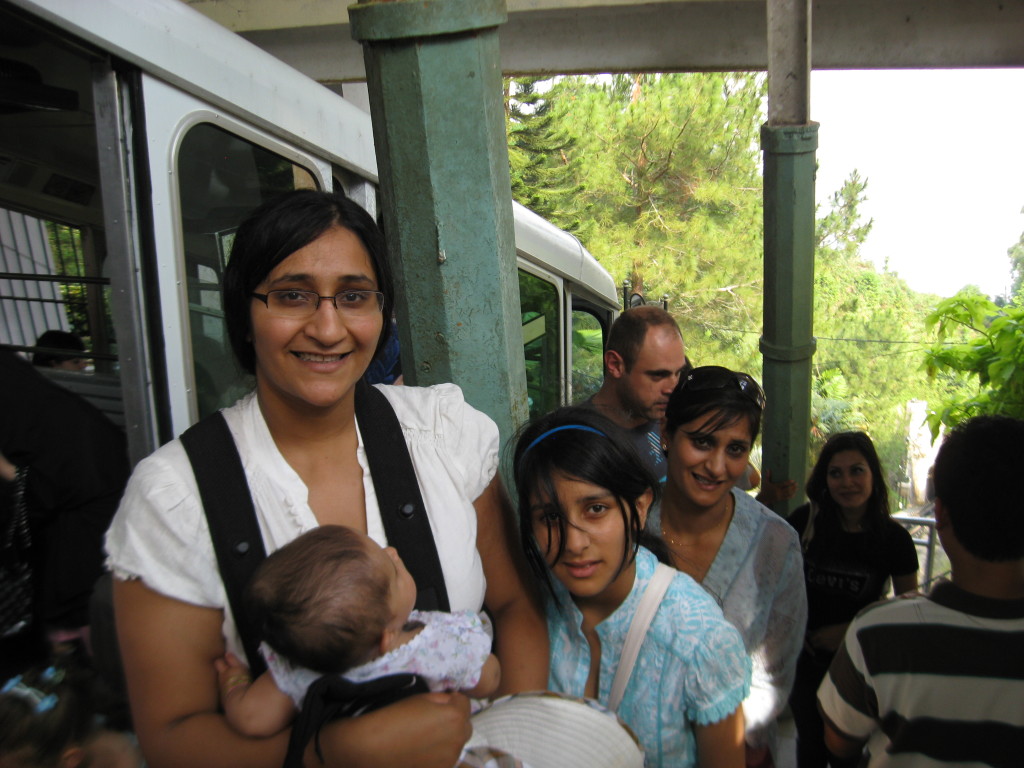 Being married to an engineer means that we deal with issues in a very methodical, logical manner but still derive at very crazy answers to our predicaments.  Doc spoke to the staff and asked what the alternatives were.  There was 3 ways down without the tram:

The later thought the craziest would take us just under an hour.  There were no handrails, some steps some random stones but as we had Maya in a carrier and the youngest of the walkers was nearly 14 years old we decided that we would do the walk down the side of the tram lines! 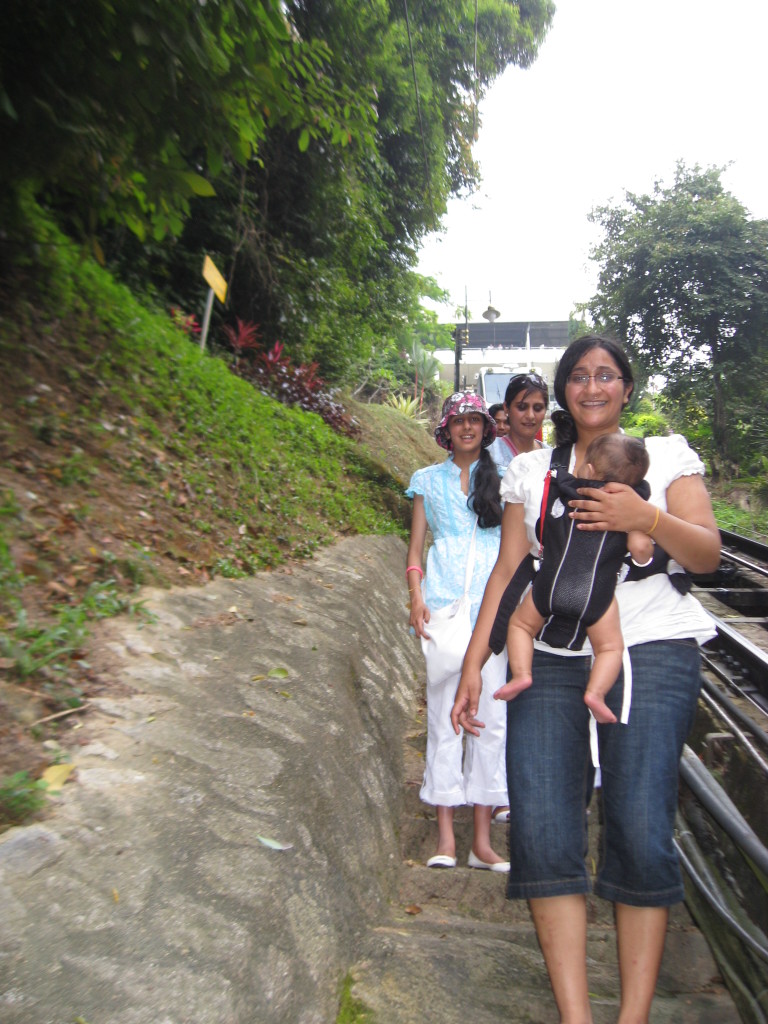 We were the first passengers to set off on this walk down but were soon joined by lots of other families and passengers, so we didn’t feel quite so crazy having doe this.  The walk down took us about an hour as we decided to have a break every 20 minutes as we wanted to make sure that we avoided any falls as the consequences of that doesn’t really bare to think about.  As a result lots of people started to overtake us but it helped and filled us with hope that people were getting further down without much trouble! 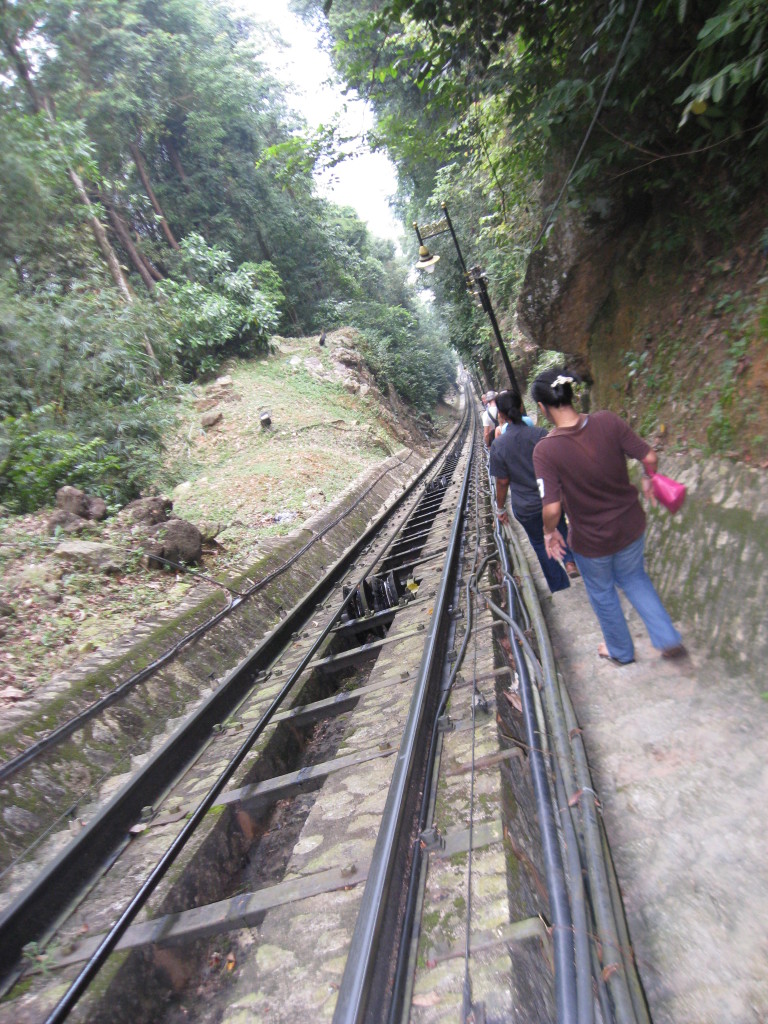 The stairs were in part made of stone but you had to make sure you kept an eye on them and went slowly as there was no hand rail and the steps were of varying height, lumpy and bumpy and on several occasions we had some near tumbles.  Some parts were really scary as I don’t really like heights and with the old fashioned gap steps which meant you could see the ground below and realise just how high you were.  Those 15 minutes on that leg of the walk was some of the most awful as we were on the side with nothing to hold on to (the tram line was in line with the steps) and you really had to focus on keeping your balance.  Every time I looked down and saw how high I was, my legs would start to shake and my stomach would plummet but after a few seconds of faltering we needed to carry on!

The scariest part of the journey  was having to cross over the tram lines.  When we set off we hadn’t realised that the pathways were made on one side only randomly stopped after a few hundred metres.  This meant we had to do a mad dash across the tram lines to start on the next set of steps.  I know the trains weren’t working but crossing train tracks whilst holding a baby wasn’t something that I thought I would be doing.  To add to this, there was a huge step up to the tracks on one side  (as you can see in the photo below) so we had to really pull ourselves up which was great fun when you are carrying a 6 month old with you! 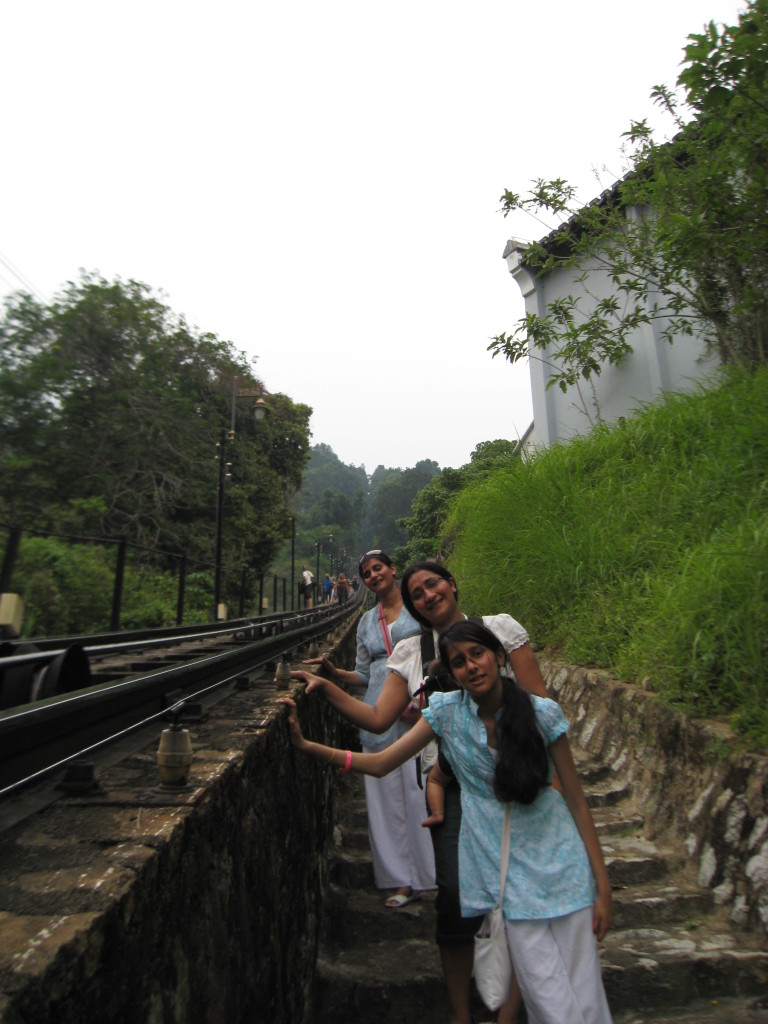 The walk down was terrifying and I think we may have been too adventurous in setting off.   However, we learnt lots from the experience and its one of those crazy life experiences that you can share at parties and we still talk about it.  When we reached the bottom, my heart literally filled with gratitude that we had safely made it to the bottom, exhausted, dehydrated and a little worse for wear but we were all safe and well.  We were greeted at the bottom of the steps by journalists and made the newspapers the next day with the picture of my niece on the front page 🙂 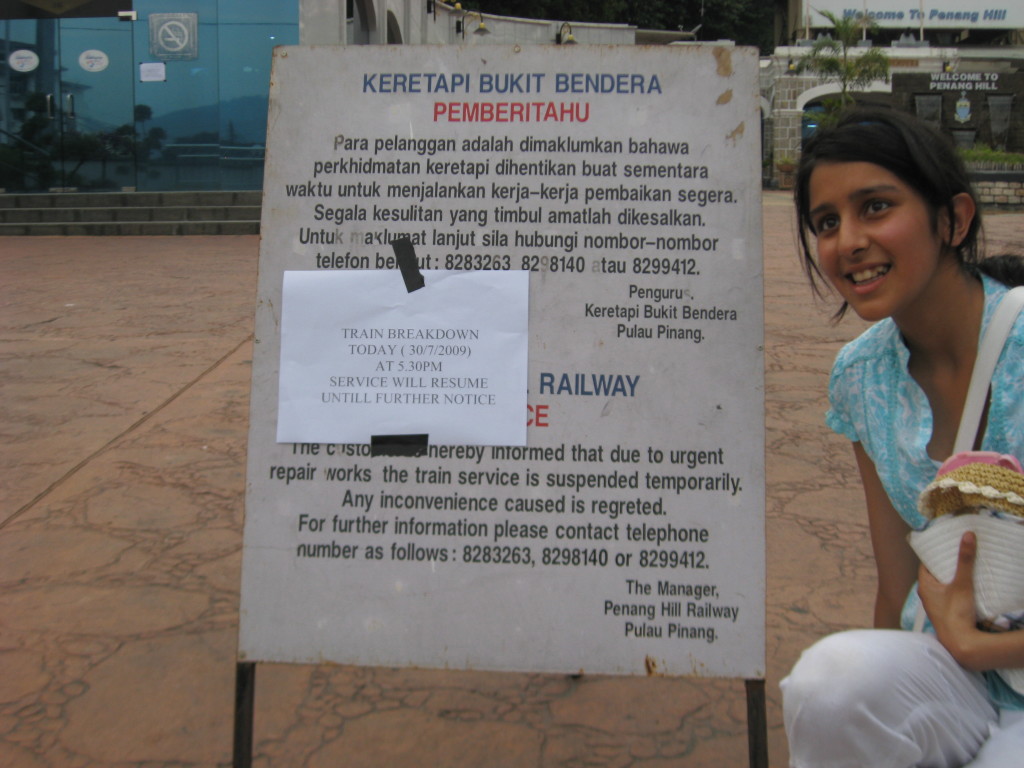 Things we learnt from this experience 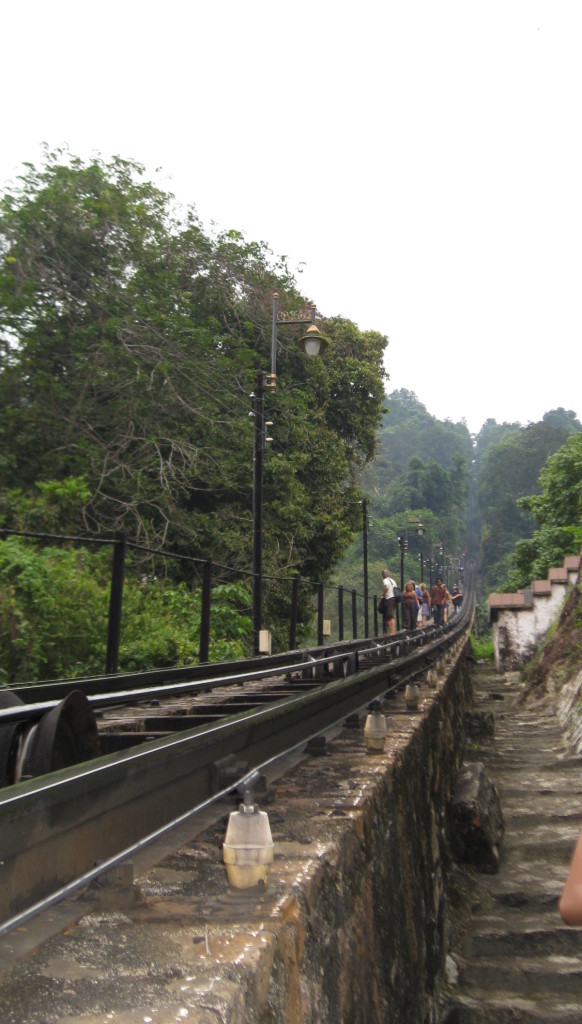 This is my post to enter Oliver’s Travels bloggers competition to win a long weekend in the Algarve to Vidamar BeachVilla.