Oh my latest baby gadget has me in fits of glee! Please meet my new, lovely manduca baby carrier. Since the arrival of Maya in 2009, we have always had the baby bjorn synergy which I do still love it but I think after the baby is oneish (dependent on your baby’s size), they become a little redundant (the carrier that is, not the baby…) 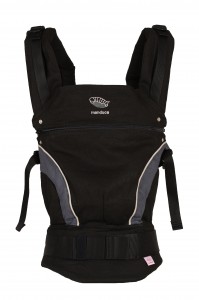 A particular event confirmed this. We were in the Grand Bazaar in Istanbul (May 2012) with Raihan then aged 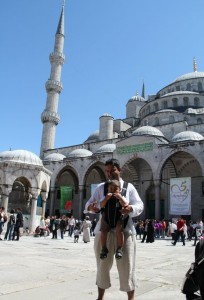 13 months in the BabyBjorn. A stall keeper shouts me down (at which point many people had turned to stare) and used words to this effect “lady, don’t mind me, but you are squashing your babies b@@@s in there!” I didn’t know where to look, I’m no prude by any stretch of the imagination but the way it was said left me rather speechless. This just confirmed Docs already existing worries and following this, neither Doc or I couldn’t bring ourselves to really use the carrier again.  As Raihan was only 13 months, we were then forced to take a pushchair with us whenever we went out (as you’ve probably gathered we go out a LOT) and as I don’t drive Raihan was always in the pushchair for nursery drop off and pick ups.

Whilst living in Warwick, baby wearing was all the rage, they looked so great and the babies and parents alike were really comfortable. I really wanted a sling but just didn’t feel confident with it. When Doc went back to work in Warwick and me and little adventurers were in Blackburn, I even purchased a couple but they just made me nervous. so we just stuck with our existing carrier when Zayn was born in January 2013.

Fast forward to March 2014, the fiveadventurers were out for the day at Wellybobs Farm. I saw a lady put her toddler son on her back and carry him in the material wrap. I watched enviously as she expertly put it all together and with a real life TV commercial feel,everyone was at peace, all smiles and had the aura of comfort. I just couldn’t stop myself and went to speak to the lady about her wrap. Turns out said lady is the organiser of the sling library in the Lancashire area. This discovery of a sling library was perfectly timed as we wanted to get Raihan walking rather then sitting in the pushchair and also not to have the restriction of a pushchair when we can go on more adventurous walks. So we went to the Friday sling library at Darwen Earcroft children’s centre. Here we met the fantastic Chris who was an absolute delight. She was amazingly patient with us as we struggled and retried the wraps and slings (again and again). If anyone is considering purchasing a sling or a wrap and are from the Lancashire Area I would wholeheartedly recommend going on to this session. The ladies who run the group are really lovely and are really knowledged in all things carrier related. It’s a wealth of knowledge that can be easily accessed and first hand accounts and views on products cannot be beaten!

But I digress, so we were really impressed with the wraps but Doc being Doc just wasn’t comfortable with a big piece of material so we settled for the Manduca. The full material slings are great but we were nervous about “the seat” element. It was just too much for us but I am truly impressed with those mums who can do it!

So back to my Manduca carrier, I am so glad we did go ahead with the purchase. I love it but it isn’t for everyone and there are a few things that I think buyers need to think about. 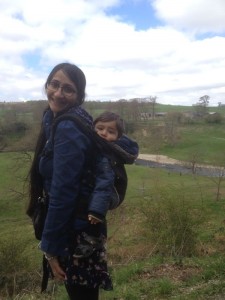 For newborns, you can use the baby insert, but people I know with small babies (aged 1/2 months) found their children cried a lot in this carrier. Looking at Zayn who is 16 months in the carrier, I think the younger ones might find it too big as the seat area is spread quite wide to allow it to fit for all the age range. When we compared findviagra.com this with our BabyBjorn, the Maduca was significantly bigger so for smaller babies we found the BabyBjorn better.  Then again, this could be due to the fact that we have always used the BabyBjorn with our newborns so it means we have a preference to this.

Putting on the carrier. It sounds pretty straight forward but even three months later I do still struggle. I only wear the carrier on my back as Zayn is already 16 months and weighs about 11 kgs. I usually need someone to hold Zayn whilst I put the straps on to keep Zayn in place. When Doc (with his infinite hands on genuineness) struggles with the getting the baby in the carrier, I can vouch that it’s not just me. In comparison, Doc always carries Zayn on the front. Once the carrier is on, it is fantastic, but if you are on your own a lot (like I am), you may want to practise (lots and lots) before solo trying it. That said, we may be part of the problem. Having had the BabyBjorn for 5 years and being able to put this one without really thinking about it may make the Menduca harder. Also, if you have the carrier from birth I think you will be a lot more used to it and so will your baby. When I’m putting Zayn he is going straight on my back he is forever wriggling and squirming.

Back support: one thing I always liked about the synergy was the back support. The Menduca distributes the weight across your waist/hips. I find the carrier hard work if the baby is on my front. But again this is probably a personal thing as my back is a little weak.

Simplicity: for all my issues about get the thing on, the Maduca is in itself quite a straight forward bit of kit. There is only one piece to the carrier (how many times we’ve misplaced the carrier part of the BabyBjorn) and once it’s in place to do the job, it’s pretty straight forward.  A simplistic description would be its a rucksack to carry a toddler around.

Three positions: I love the fact that you can have the baby on the front, back and side.  I have yet to master the side method but YouTube videos make it look really straight forward.  I think that would be ideal for things like aeroplane boarding.

Longevity: The carrier is very versatile and can be used from birth to 20 kgs (Raihan is 3 and weighs about 16Kgs which is on the 50 per centile for boys).  I know a lot of the other carriers do say that they have that weight capability but you need to look at the space for the child, so even though they may fit inside are they comfortable? and also where the pressure points carrying the child would create on you. Its effect comes quickly and lasts for up to 8 hours, BUT the drug causes addiction. The use of Tramadol should be postponed to http://medimagery.com/buytramadol/ the very last moment, when other drugs already proved useless in stopping the pain syndrome. The drug is prescription! Special account. It is cheap.  For example,  the forward only carriers put a lot of pressure on your shoulders when you are carrying a bigger child.  Whereas, the Maduca (touch wood) has been great so far.  I use the carrier every day and its always with me whenever we go for a day out!  I had Raihan in the carrier on Maya’s sport day and he fell asleep in it, he was in the carrier for about 45 minutes. 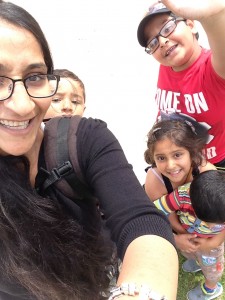 So overall, I am really happy with the carrier, for me its perfect for a child of about 1.  That said, if you used it from newborn, I am sure that you would be used to the way it works.  It has made my life so much easier and I usually don’t even need to think about taking the pushchair or worry about the restriction of having a pushchair with us.  Zayn is comfortable inside it and it is now one of the most essential baby kit items that I use all the time!  And we now get to take selfies with Zayn inside the pic
We hope you liked the review and would love to hear from you, join us on facebook, twitter or email us on fiveadventurers@gmail.com